Chief of The Yetis Village

Telling everyone lies about the existence of the Smallfoot.

Protecting his village from danger.

Lie to protect his village (succeeded for a while, failed with Meechee; formerly).

Get Migo to drop a supporting character in a cave where he would freeze to death (failed).

Stonekeeper is the main antagonist of Warner Animation Group's fifth animated film Smallfoot. He is the Chief of the Yetis village and the father of Meechee and Thorp.

He was voiced by hip-hop rap artist Common, who also played Mr. Price in Run All Night, Cassian in John Wick 2, Monster T in Suicide Squad, and Kiburi in Disney's The Lion Guard.

When Migo came to his village in panic and told them about seeing an Smallfoot (Human), his village was about to panic, but The Stonekeeper told them that Migo didn't see anything, Meechee was not convince and tried to reason her father, but he then tell his village that Migo might have see a Yak and not a human. Which he tell Migo that the stones of truth tell that The Smallfoot never existed, he tell him if he denied the stone of truth, Migo tell him that he does denied them, which resulted him to his banishment as The Stonekeeper told him if he came back to his sense he might be welcome back to The Yetis Village.

When he see Migo, his daughter Meechee and their friends enter the village, he tell Migo if he learn about his banishment hoping that he forget about seeing an Smallfoot, unfortunately Migo show that he was right about The Smallfoot when he show Percy The Stonekeeper seem so shocked that the Smallfoot is real but shocked that his village was more interested in Percy. Meechee then tried to convince her father to talk to Migo, which he agree on after sending Thorp to tell Migo that he want to see him, he then bring Migo under the mountain and tell him threw a song (Let It Lie) how long ago they lived down the mountain before and approached the humans who mercilessly chased them and killed some of them in the process trying to prove that all human are the same. Revealing that he knew Smallfoots were real and every stone made were all tied to them, making Migo scared, thinking that he's right about Percy, remembering when they first met he practically attacked him, then telling Migo he needs to lie to everyone that it's not a Smallfoot.

Percy then feeling ill and Migo then lies to his people, and having him fearfully insulting Gwangi, Kolka and Fleem that they're crazy when they tried to tell everyone they're lying, tainting Migo's friendship with them as they feel betrayed by him, much to The Stonekeeper pleasure and he sends Meechee to her room, as she is ashamed of Migo for siding with her dad, she doesn't see him as a friend anymore either then the Stonekeeper places Percy in a box, so he can get even more cold and sick so he'll die and never tell anyone he saw the yetis, much to Migo's surprise when he never agreed to kill the Smallfoot. Later Migo realizes how wrong he and Stonekeeper was about lying, he tries to tell Meechee the truth, as he launches himself thanks to his dad's help, but Meechee wasn't in her room as the Stonekeeper sees Migo in Meechee room after Dogle shot him there they both realized that Meechee decide to take Percy back home herself. Realizing his errors, that his lies have gone too far this time, The Stonekeeper then decide to go save them after they are attacked by an helicopter by throwing his stones at it, after everyone is save after Percy sacrifice himself after disguised himself as a Yeti, he let Migo show the village why he and Migo lied to them, Migo then show them the world down the mountain and all Yetis decide to follow Migo to the town, the police then come to protect the citizens, but Percy and Brenda protect the Yetis and the other humans does the same to the police's confusion and shock, has they welcome the Yetis to their town proving that some humans will protect them. 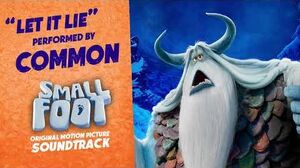