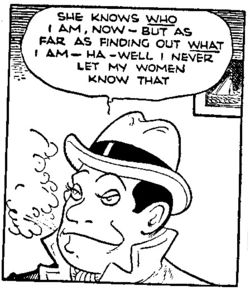 Stooge Viller is a villain in the comic strip Dick Tracy, the 1960s cartoon, the Archies TV funnies Dick Tracy segments, and a minor antagonist in the movie.

In the strip, he tries to frame Dick Tracy by planting counterfeit money on him. And tips off store owners Tracy bought merchandise from who ask the department to fire Tracy. Not content he tries to seduce Tracy's girlfriend Tess. He later shoots her when she finds out he framed Tracy. He tries to leave town but is recognized by Tracy's adoptive son. He and Tracy fight and Stooge is arrested.

In jail he befriended Tracy's other nemesis Steve the Tramp and the two set out to get revenge on Tracy. Later he shoots Tracy's adopted son's father and kidnaps Tracy's girlfriend but is arrested again. Years later, he works with Professor Emirc to peddle gadgets to the underworld. Eventually, Viller dies of gangrene when he is accidentally shot by his estranged daughter.

In the 1960s cartoon series he is often paired with Mumbles. Stooge often acted as Mumbles' interpreter.  In one episode, for example, Mumbles was in court, and the case was about to be thrown out because his testimony was incomprehensible. Go-Go Gomez was sent to find Stooge and bring him to the courthouse before Mumbles was released from custody.

In the Archie's TV Funnies Dick Tracy segments he has a reputation as the world's greatest gold smuggler. He robbed an armored car, using a device that temporarily froze people (including Sam Catchem). Tracy planned a sting operation that would lure Stooge into attempting to steal a large quantity of gold from a train. Stooge posed as a railroad police officer and confronted Junior Tracy (who had been left out of the plan and was attempting to sneak onto the gold car after dark). Stooge learned of Tracy's plan and was able to successfully steal the gold by stealing the entire train car. He was eventually thwarted by Junior.

In the movie, he is one of Lips Manlis's men and is killed by Flattop and Itchy at the beginning of the movie.

Stooge as he appears in the 1960s cartoon

Stooge as he appeared in the Archie's Tv Funnies Dick Tracy segments. 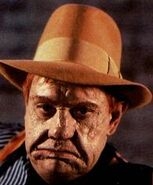 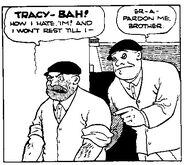 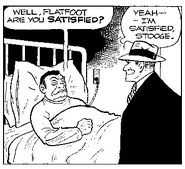 Stooge on his death bed 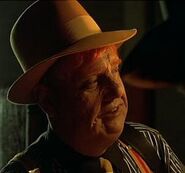