Villains Wiki
Register
Don't have an account?
Sign In
Advertisement
in: My Little Pony Villains, Dissolved Organizations, Pirates,
and 15 more

Brutish Marauders
The Storm King's army is a major antagonistic faction, appearing in the 2017 animated film, My Little Pony: The Movie. It was a large group of Storm Creatures lead by the tyrannical Storm King, as well as his second-in-command, Tempest Shadow and her minion, Grubber.

The army was established by the Storm King in his quest to gain ultimate power and rule the world. At some point, they recruited Tempest Shadow, who the king promised to restore her broken horn in exchange for her loyalty. They also attacked Mount Aris, the home of the hippogriffs, forcing its residents to hide underwater, and enslaved Captain Celaeno and her crew as cargo handlers.

The Storm King's army then attacked Canterlot in order to steal the magic of the Alicorn princesses and conquer Equestria. Tempest Shadow successfully captures Princesses Celestia, Luna and Cadence by turning them into statues, but Twilight Sparkle was able to escape along with her friends. After taking control of the city, the Storm King gives Tempest three days to retrieve Twilight or suffer the consequences.

After chasing the Mane Six plus Spike across the land south of Equestria, Tempest successfully captures Twilight and return her to Canterlot after her reckless actions caused her friends to abandon her. The Storm King then uses the Staff of Sacanas to rob Twilight and the other princesses of all their magic, becoming all-powerful. However, Twilight's friends, accompanied by other allies they met on their travels, return the Canterlot to rescue her, effectively fighting off the Storm Creatures.

The Storm King then unleashes a massive hurricane to destroy them all, which also endangers his own soldiers. He then reveals that he was only using Tempest and attempts to kill both her and Twilight, but was stopped by Twilight's friends, forcing him to drop the staff. Twilight retrieves the staff with her friends' help, and the Storm King himself was killed when Tempest Shadow turns him into a statue and makes him fall off a balcony, shattering on impact.

With the Storm King dead, Tempest, Grubber and the Storm Creatures reform themselves and become friends with the ponies, effectively dissolving the Storm King's army for good. 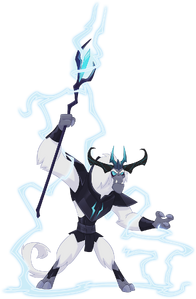 The Storm King, supreme leader of the army. 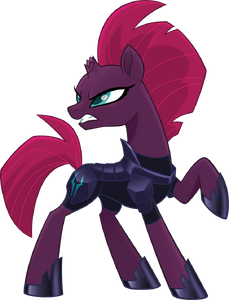 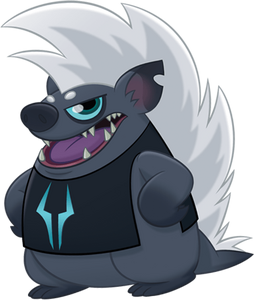 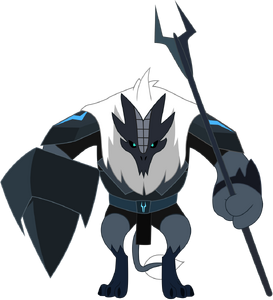