Celebrate Christmas (currently after being turned good by Rudolph's wish).

Stormella, also once called the "Evil Ice Queen", is the (former) main antagonist of the 1998 animated Christmas film Rudolph the Red-Nosed Reindeer: The Movie. She is named so because of her magical ability to start a snowstorm. She also has her penguin butler named Ridley, and her wolves.

She was voiced by Whoopi Goldberg (who also played Shenzi), and her singing voice was provided by Carmen Twillie.

Stormella is truly influential, authoritative, oppressive and arrogant. She is a very destructive and powerful individual who presumably tries to get rid of Santa Claus and ruin Christmas. She is also shown to have an extremely controlling and manipulative demeanor. One of her cruelest plans is when she unleashes stormy weather with her magic. Despite her tyrannical and blasphemous nature, Stormella becomes extremely nice, charming, compassionate and sympathetic, so she can celebrate Christmas (currently after being turned good by Rudolph's wish).

Stormella is first seen barging into Santa Claus's workshop with Ridley and her wolves after Boone and Doggle two of Santa's elves accidentally destroyed her ice sculptures at her palace Ice Castle. She demands that they are handed over to her, but because Santa refuses that idea, she decides to forbid anyone to ever cross her ice bridge, saying that if anyone crosses, she will cause a storm. When traveling back to her castle, Stormella tells Ridley that she will wait for someone to cross her bridge so she can start the storm and finally put Santa out of business.

Years later, as a young doe named Zoey crosses the bridge while looking for her friend named Rudolph, who had run away from home, she is caught and locked up by Stormella, who later imprisons Rudolph and one of his friends, Leonard, the polar bear. Rudolph tells Stormella that she will be sorry when Santa hears about this, to which Stormella replies that Santa is not worried about them as he has his own problems. She also says that since Zoey crossed her forbidden bridge, she will cast the storm of the century. When told by Zoey that it is almost Christmas and a storm would ruin everything, Stormella sings "I Hate Santa Claus". Rudolph tells Stormella that she will not get away with with this, to which Stormella tells him to just watch and when called an evil old witch by Zoey, Stormella reminds her that she made the storm possible and tells her to work that out in therapy. Stormella then leaves to cast her storm.

Later, Rudolph's other friend Slyly the arctic fox sneaks into Stormella's bedroom to steal the key (while she is sleeping) and frees the heroes. Stormella confronts them and decides to harm Zoey but Rudolph in anger causes his nose to light up making Stormella fall down a cliff side, but Rudolph and his friends save her. As thanks, she owes Rudolph a wish. Although she thinks he should wish for a normal nose like the other reindeer, but he only wants her to be nice. He wishes it three times and she changes. Rudolph notices that Stormella does not look any different, but she tells that she's changed on the inside. However, she cannot stop her storm as it has to run its natural course. She sends the group on their way and let's them use her bridge as it's the shortest way before wishing them a Merry Christmas.

Later, on Christmas, Stormella gets a new ice sculpture of herself from Rudolph and is later shown among the characters who are singing "Rudolph the Red-Nosed Reindeer", and was last seen playing the piano. 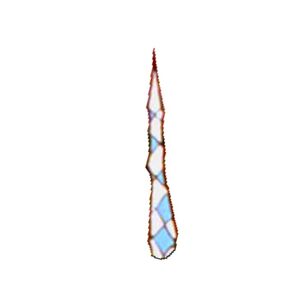 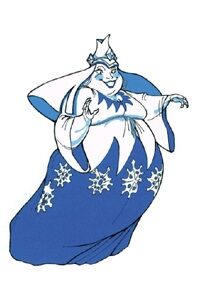 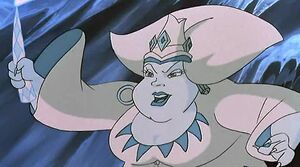 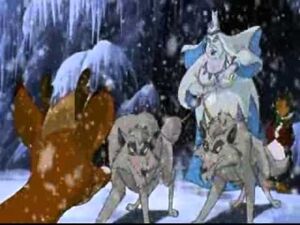 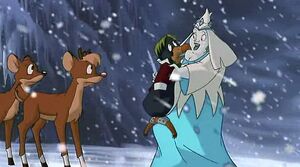 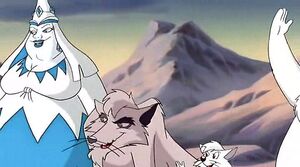 Stormella with one of her wolves. 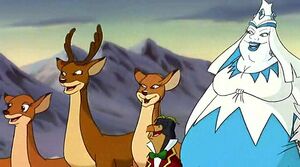 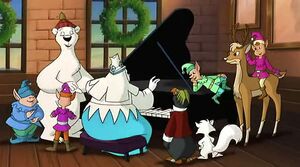 Stormella playing on a piano.
Add a photo to this gallery

Retrieved from "https://villains.fandom.com/wiki/Stormella?oldid=4379806"
Community content is available under CC-BY-SA unless otherwise noted.