Kill The Hero and his companion.

The Stormsgate Citadel, sometimes called the Stormgate Castle, Stormgate Citadel by mistake and Azimuthia in spanish; is a giant floating castle with overgrown vines. Despite its appearance it is NOT a villain's lair, but a villain; and a powerful boss in the Dragon Quest series.

Making its debut in Dragon Quest VI, it stands in the way of the hero and his friends before they can ascend to Cloudsgate Citadel and could be some sort of security system. Not much is known about this peculiar enemy but one must watch out when it blasts its cannons and heal immediately whenever it tries to crush the heroes.

Dragon Quest Monsters Joker 2 The Stormsgate Citadel is a three-space Rank A monster from the Material family. It cannot be synthesized as it is only obtainable as a prize that can be won in the Monster World Championships. To do so one must earn a rank in the top 100 positions in the Mega Scout category. 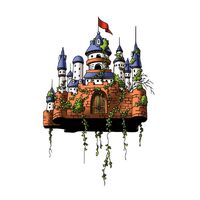 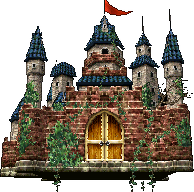 The Stormgate Citadel as it appears in DQMJ2.

The Stormgate Castle, also known as the Stormsgate Citadel.