One of the Four Winds (formerly)

Get revenge on Barbatos and Mondstadt for abandoning him (formerly, failed).

Dvalin, better known under his alias Stormterror, is a major antagonist turned supporting protagonist in Genshin Impact, serving as the main antagonist of the Prologue chapter. Once one of the Four Winds established by Barbatos to protect Mondstadt, he turned against the city after being falsely believed by the Abyss Order that the city rejected him. Consumed by both his hatred and the venom circulating through his system, Dvalin became a monstrosity that terrorized Mondstadt until Venti and the Traveler soothed him of his wrath. He can be refought each week as a Weekly Boss.

He was voiced by Brook Chalmers in English, Bo Peng in Chinese, Shunsuke Takeuchi in Japanese, and Pyo Yeong-jae in Korean.

Thousands of years ago, Dvalin was born in the high heavens from a convergence of elemental energy. A curious dragon, Dvalin observed humans, but could not understand their emotions as they fled from him. Then one day, he heard Barbatos, the Anemo Archon playing music from the Holy Lyre de Himmel. Dvalin chose to remain by the side of Barbatos, for he wished to understand all souls. Through Barbatos, Dvalin learned human speech and how to love the people of Mondstadt.

After Barbatos disappeared a thousand years ago, Dvalin was appointed as one of the Four Winds, powerful deities entrusted to protect Mondstadt. He served as the Dragon of the East, alongside Andrius, the Wolf of the North, and Vennessa, simultaneously the Falcon of the West and the Lion of the South. Since Dvalin did not have a proper temple built for his worship, he instead chose to live in the ruins of the old city of Mondstadt formerly ruled by Decarabian, the former Anemo Archon and the God of Storms.

Five hundred years ago, Mondstadt was attacked by Durin, a shadow dragon that invaded the kingdom. From the prayers of Mondstadt's people awoke the Ameno Archon, who summoned Dvalin on his behalf. As Mondstadt's last line of defense, Dvalin clashed against Durin in raging storms in a fight to the death. After a long and gruesome battle, Dvalin prevailed and slew Durin by tearing out his throat. However, this caused Dvalin to indirectly ingest the poisonous blood of Durin in the process. Weakened from the poison's effect, Dvalin fell into a deep slumber, but not before making one last wish to be understood by humanity.

Dvalin would eventually awaken from his slumber sometime before the Traveler arrives in Mondstadt. But since the residents have long forgotten him, he spread fear across the land once more. Hurt by both his rejection and the painful blood clots on his back, Dvalin was tainted by the Abyss Order when they corrupted the poisonous blood of Durin in his system. Dvalin grew aggressive and attacked Mondstadt, believing the people he once protected had turned against him. The residents of Mondstadt refer to the dragon as "Stormterror". The Traveler and Paimon first see Stormterror flying above them after they interact with a Statue of Anemo. They find the dragon in a nearby forest alongside a mysterious boy trying to calm Stormterror. The Traveler's newfound power of Anemo accidentally alerts Stormterror, causing him to attempt to attack the boy before fleeing.

In the city of Mondstadt, as the Traveler tests their new Wind Glider gifted to them by Amber, Stormterror suddenly appears above the city, causing a massive wind storm that creates multiple tornados, one of which sucks up the Traveler and sends them into the sky where Stormterror almost eats them. But in the midst of the storm, the Traveler is given the ability to harness the wind by a mysterious voice, enabling them to shoot at Stormterror and drive him from the city. Later, the Traveler and Paimon meet the boy from earlier, revealing himself as Venti, the mortal vessel of Barbatos. He explains that Stormterror is suffering from degradation that the Abyss Order was taking advantage of. He tried to cure him earlier, but the Traveler's arrival caused him to accidentally poison Stormterror.

Through Venti's advice, the Traveler is sent to obtain the Holy Lyre so Venti could properly purify Stormterror, as the nuns of the Favonius Cathedral didn't believe his claims to be the Archon. After the lyre is temporarily stolen by the Fatui, Venti repairs it with Teardrop Crystals. Once the lyre was restored, Venti, the Traveler, Diluc, and Grand Master Jean head to Starsnatch Cliff to summon Stormterror and purify him back into Dvalin. But when Venti was about to purify the dragon, their effort is foiled by an Abyss Mage who destroys the lyre. The Mage manipulates Stormterror and convinces him to destroy Mondstadt, for they have turned their back on him and all Venti was doing was attempting to deceive him once more. Enraged, Stormterror roars at Venti for his betrayal before flying away.

The Traveler eventually tracks down the Abyss Mage and defeats it, releasing some energy upon its death. Venti realizes the energy was what the Mage used to sever his connection with Stormterror. Using the energy, Venti dispels the barrier sealing away the ruins Stormterror uses as his base. Jean insists on killing Stormterror to bring peace, but Venti insists he can still purify the dragon using the Traveler's ability to purify Teardrop Crystals. They activate a light actuator that attracts Stormterror. Seeing this as their chance, Venti imbues the Traveler with Anemo energy to enable them to pursue Stormterror from the air.

With their new power, the Traveler destroys one of Stormterror's two corrupted blood clots before battling him in a floating arena to destroy the second clot, purifying Dvalin of his suffering. Just then, the platforms give way and send everyone falling, but Dvalin rescues the party and flies them back to Mondstadt on his back. On the way, he asks Venti why he did not ask him for protection like last time. Venti replies that he didn't want Dvalin to listen to the Abyss Order, and if he instead ordered him to act free, it would not be the same as having real freedom. Venti restored Dvalin with the power of the Anemo Archon despite him telling Venti that he was no longer part of the Four Winds. With reassurance that nobody was after him, Dvalin flies off. Venti later tells the player that he has no intention of removing Dvalin from his service as one of the Four Winds and wants him to choose for himself and learn what freedom is.

In the Version 1.6 update, Dvalin flies the Traveler, Klee, Barbara, and Jean to the Golden Apple Archipelago so Klee could confront the "Dodo-King" who wanted to take Dodoco away. He later flies Dliuc, Kaeya, Albedo, and Razor to the island as well.

Dvalin is a massive dragon colored in shades of blue, with his body being aqua blue, his eyes and chest being bright blue, and his horns and talons are dark blue. He has three sets of wings on his back with brightly colored skin and scales emitting an aqua glow. His face consists of two blue glowing eyes, a sharp beak full of fangs and a long tongue, and two horns pointing backward that gradually fade from blue to black. He has four limbs that end in black arms and legs. His long tail ends in multiple feathers.

On his back are two purple spikes, which are blood clots caused by Dvalin's battle against Durin that the Abyss Order corrupted until the clots are destroyed by the Traveler, Venti and their friends. 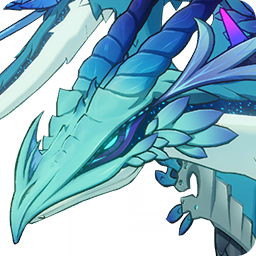 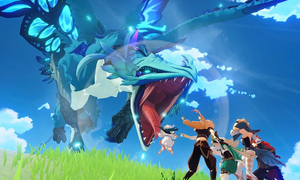 Stormterror roaring at Venti and friends. 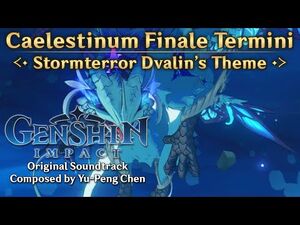