Creator and ruler of Labyrinthia

Ability to make anything come true by writing in his book.

The Story Teller (real name: Arthur Cantabella) is one of the overarching main antagonists (alongside High Inquisitor Darklaw) of the video game Professor Layton vs. Phoenix Wright: Ace Attorney. He is the ruler of Labyrinth City, who has the power to make everything he writes in his book come true, which he apparently uses for evil purposes. He is the one in charge of the trials against the witches who terrorize the town.

Arthur Cantabella was raised in a small, poor town, where he grew up with only one friend, Newton Belduke. One day, they stumbled upon the ancient ruins underground, where they found the Bell of Ruin, a bell that an ancient civilization who roamed their land had worshipped. There were ancient writings that Newton was able to decipher part of it around that time. It said that the bell brought calamity upon the native's plants and water, which the natives were led to believe that it was cursed by an entity known as the Great Witch Bezella, thus causing them to seal it within the ruins. Although warned, Newton and Arthur were excited after they discovered the bell, as they believed it could save their town. Ever since then, the two of them vowed to return for the bell as they went their separate ways in their career.

Cantabella went to study management at a university in London while Belduke studied the plants in their area. Belduke discovered that the plants were contaminated by pure silver water in their land, causing anyone who drinks it to fall unconscious the second after they hear the sound of pure metal being struck. Newton later created an anaesthetic from the plants that led to the foundation of Labrelum Inc. with Cantabella as their president.

Sometime later, Belduke and Cantabella took the Bell of Ruin and built a bell tower for it in their town. They created two keys that grant access to the tower, which they both gave to their wives. Cantabella's daughter, Espella, wanted to ring the bell, but her father warned her not to ring it, as he explained to her about Bezella in order to prevent her from doing so.

One day, while investigating the ruins during the fire festival, Arthur and Newton return to see the town on fire. There, they find Espella and Newton's daughter, Eve, knocked unconscious after Eve rang the bell without hesitation.

After that, Espella became catatonic for believing that she rang the bell and that she was Bezella. In order to save her from insanity, her father wrote a storybook that he read in front of his daughter, revealing to her that she is not Bezella. He then asked for help from Belduke to make the story look real, which led to Project Labrynthia: a research facility that is disguised from the real world as a town. For the inhabitants, many people gave up on their lives and decided to sign a contract with Cantabella, who gave them a specific role in the town. Ever since then, the town had parades where the Story Teller writes a story for all of his people with a hypnotic ink, leading them to believe in what they read. The town also had witch trials where several people were accused of being a witch and were put in a chamber that was brought into a pit of fire. These people actually survived and became Shades: a group of cloaked figures who used invisible machinery to make people believe it's magic. As for the bell tower, it was covered in an invisible cloak.

Sometime later, Carmine Accidenti, an investigator and student of Professor Layton, stumbled upon the town and met Espella. He discovered the town's secrets and escaped with her. The Story Teller ordered Darklaw and the Shades to go after them. They were able to stop Carmini but failed to capture Espella due to the arrival of the police. Espella fled the scene and went to look for Professor Layton to ask for his help.

Three months ago on a rainy night, lightning struck the bell tower, burning away the invisible blanket covering the bell tower in the process, and leaving the bell tower visible to the people. When Newton Belduke saw it appear on that night, he committed suicide, which made Darklaw turn against the Story Teller.

Darklaw summoned Professor Layton, Phoenix Wright, Maya Fey, and Luke to Labyrnthia, where they first see the Story Teller at a parade, giving out stories to the citizens who were very excited about it first. However, they were then disappointed after they read it, as they found out that it was a story about a girl using witchcraft to burn two men alive. The townsfolks always believed in what the Story Teller writes was true, thus puzzling Professor Layton and Phoenix Wright.

He was then seen later in the game, where he and the crowd stood outside of the bell tower, where Espella appeared before them, summoning a fire dragon that killed the Story Teller.

The Story Teller revealed to everyone that Labyrnthia is a research facility with human test subjects having no memory of what happened ten years ago. Espella, on the other hand, remembered an incident that happened around that time, claiming that she saw a fire dragon attack the village, making her stand on trial, and angering the Story Teller.

Espella remembered that she was with a person around that time. Phoenix Wright revealed that person to be Darklaw to the court, who appeared sitting next to Professor Layton. The court then started questioning Darklaw, who revealed her hatred towards the Story Teller, blaming him for her father's death. As the court heard Darklaw's story of the incident, Espella believed that she too was Bezella, so she fled to the bell tower, shocking the Story Teller and the court.

There at the bell tower, Espella was seen at the belfry. The Story Teller begged her to come down, but Espella refused as she planned to kill herself. Professor Layton told her to be brave a little longer, as he revealed that there is more to the story. Phoenix Wright revealed to the court that Espella saw the fire through a fretwork of a dragon, making her believe the town was attacked by it. Espella was seen standing in the exact spot of that fretwork, which Phoenix told her to look for a contraption that rings the bell. Espella went to search for it and came back, informing Phoenix and Layton that the contraption is actually on the other side of the fretwork. This revealed that it wasn't Espella who rang the bell. As Darklaw was the only other person with Espella around that time, Phoenix Wright pointed out that it was her who rang it. Professor Layton explained to Darklaw that her and Espella's memories were altered by the tragic incident. After discovering this, Darklaw became shocked as she dawned the cloak of invisibility and ran away.

As the crowd of people look at the bell tower again, they see Espella standing on the roof, not caring if she rang the bell or not, for she still believed she was to blame and that she was Bezella. The Story Teller told her not to do this, as he revealed to her that it was his fault. Espella, however, thanked him for everything he did for her and was about to fall to her death until Darklaw appeared hanging onto the handrail, saving Espella.

Phoenix and Maya tried to rush in the bell tower to save them, but the Story Teller stopped them as he stated that the handrail Eve is holding onto is rotten through. As Espella and Darklaw fall, Professor Layton ran and pointed towards them that somehow made them float in midair.

Professor Layton learned from the Story Teller that magic doesn't exist in Labrynthia, meaning that there's an illusion behind all of it. This illusion could only be broken by a certain "spell" that is hidden on the cover of the spell book, the Grand Grimoire. As Phoenix Wright and Professor Layton decipher the spell, and as the sun began to rise, both of them shouted out the spell together, revealing several types of machinery all over Labrynthia. Luke was then seen driving in one of the machines that were holding Darklaw and Espella.

The Story Teller explained to them that they had to require that machinery, in order to make people believe it was magic. In order to hide it from the citizens of Labrynthia, the Story Teller hypnotized them into not seeing pure black, which was the colour of the machinery.

Curious about why the Story Teller wanted to end the story, he revealed to them that he was suffering from an incurable illness that he kept as a secret, as he didn't care for Labrynthia anymore. Espella began to sorrow for her father, but the Story Teller told her to cheer up as he revealed that Labrelum created a wonder drug from Newton's research to cure him of his disease, thanking Newton for what he has done. As for Labrynthia, the Story Teller said he will free the people from their hypnosis, give back their memories, and turn the town into an uninhabitable ruin as it was before.

While at first, the Story Teller seems like a cruel ruler who causes chaos with his stories, he is actually a caring old man who only deceives and scares the people of Labyrinthia to protect his daughter from emotional trauma.

The Story Teller has white hair and wears middle-age-like elegant clothes. He has a metallic mask with a gem instead of an eye.

The Story Teller is nearly omnipotent inside of Labyrinthia, as he is in control of the complete illusion of the city through the invisible machines he had put everywhere. 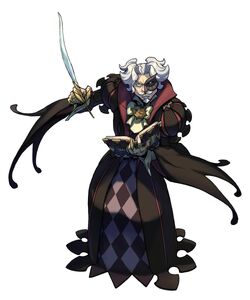 The Story Teller on his throne. 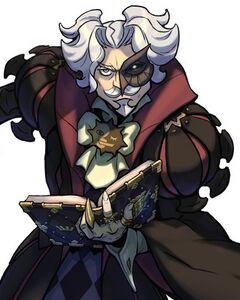