Right-Hand minion of the Strange Lion

Have Scar work for him and the Strange Lion (failed).

Sadistic Minion
The Strange Cobra is a minor antagonist of the The Lion Guard special Battle of the Pride Lands. He was an unnamed blue cobra who was the right-hand minion of the Strange Lion.

What of the Strange Cobra's origins were unknown, but given to the fact that he appeared in the Outlands, it seemed to be likely that he may have came far away from the Pride Lands and Outlands. According to Scar as he explains his story to a cobra named Ushari, the Strange Lion was first seen when an adolescent Scar (who was the leader of The Lion Guard going under the name Askari) was scouting the Outlands.

Upon learning that Askari is second-best in power to his older brother Mufasa (who was King at that time) and that he has a special power called the Roar of the Elders, the Strange Lion claimed that he had wisdom and power, and that with the help from Askari and the Roar, they could take over the Pride Lands and rule everything in a duumvirate. Askari finds the idea to be intriguing, but as he follows the Strange Lion to a volcano, the Strange Lion sets up an ambush by having the Strange Cobra to attack Askari on right eye, which gave him his trademark scar.

As Askari fumes in pain due to the venomous bite, the Strange Cobra smirks at this as the Strange Lion reveals his true colors by attempting to blackmail Scar into serving for him in exchange for the cure of the venom. However, being enraged of being set up, Askari instead uses the Roar of the Elder to blast both the Strange Lion and Cobra, sending them away into the lava river behind to their deaths. Returning to Pride Rock, Askari explained his story to Mufasa and expected to be praised for stopping the Strange Lion's attempted coup d'etat, but Mufasa just friendly patted Askari while giving his nickname Scar.

While the Strange Cobra and the Strange Lion were never able to proceed with their plans to take over the Pride Lands, their attack on Scar, coupled with the cobra's venom slowly poisoning his mind, makes certain one thing about them: they are indirectly responsible to make Scar turn into the selfish and traitorous tyrant he later became. 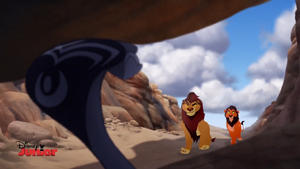 The Strange Lion luring Scar to the Strange Cobra. 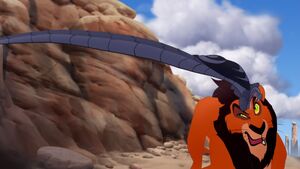 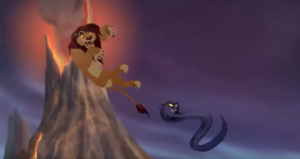 The Strange Lion and Cobra being blasted to their deaths by an angry Scar for ambushing him.
Add a photo to this gallery

Retrieved from "https://villains.fandom.com/wiki/Strange_Cobra?oldid=3989171"
Community content is available under CC-BY-SA unless otherwise noted.