Trying to save Christine Palmer (formerly).

Find a way to reverse the Absolute Point in time and bring Christine back to life (succeeded but then backfired).

Help the Watcher save the multiverse from Infinity Ultron (succeeded).

Doctor Stephen Vincent Strange, M.D. Ph.D, also known as Strange Supreme, is one of the main protagonists of the first season of the Marvel animated anthology series What If...?, first appearing as the titular protagonist of the fourth episode.

An alternate version of Earth-199999's Doctor Strange, he becomes a Master of the Mystic Arts after losing his girlfriend Christine Palmer to a car crash - instead of losing the usage of his hands. Despite his initial heroism, the grief of losing his love resulted in Strange turning to the dark side, absorbing various interdimensional beings in order to attain enough power to alter the past and resurrect her. The Ancient One and another Doctor Strange variant attempt to warn the darker Strange that creating such a paradox would usher in the end of the universe, but it ultimately fell on deaf ears.

Like his original version, he was voiced by Benedict Cumberbatch, who also played Smaug and Sauron in The Hobbit trilogy, Khan Noonien Singh in Star Trek Into Darkness, William Ford in 12 Years a Slave, Dormammu in Doctor Strange, Shere Khan in Mowgli: Legend of the Jungle and The Grinch in the 2018 film of the same name.

He looks almost as his original version with blue eyes, brown hair and beard and gray sideburns. As time goes by, he starts to look more and more sickly, with thin, pale skin and gray bags around his eyes.

In his quest to revive the love of his life, this version of Doctor Strange is even more arrogant and stubborn - growing more blind-sighted with grief and anger over the fact that her tragic death was always meant to be her fate. Despite being warned about the consequences, Strange is willing to go to extreme lengths in order to achieve his desires, spending centuries absorbing other beings and acquiring their powers, ultimately transforming him into a hideous amalgamation of them.

Strange is shown to be impulsive, unable to resist the temptation of using the Eye of Agamotto to reunite with his love and attempt to avoid anything that could possibly kill her. Even as these efforts are proven to be futile, Strange continued to tamper with the flow of time up until the Ancient One's intervention.

After Strange successfully alters the past and resurrects Christine Palmer, the consequences are immediately felt as the entire universe is destroyed in front of them. Strange begins to show penitence after realizing that he'll lose Palmer again to the end of the world, as he immediately begs for The Watcher to intervene. All Strange receives is a chide for his lack of consideration; that, combined with the realization that Palmer is lost for good, reduces Strange to become regretful of his actions. Although the persevering sentiment for Palmer is what ended up turning Strange into a villain, it showed that he was devoted to the one person he truly loved.

When he meets The Watcher again after the latter had been defeated by Infinity Ultron, Strange displayed his maturation as a result of his imprisonment inside what was his reality. He also retained his snark and sense of humor as he beckoned The Watcher to violate his oath to save the Multiverse, referencing how the latter refused to save Strange's universe when called upon to.

What If... Doctor Strange Lost His Heart Instead of His Hand?

In this universe, Doctor Stephen Strange was to receive an award for performing a radical hemispherectomy successfully. On the way to the event, Strange's vehicle was struck by another, causing the death of his passenger and lover Christine. While Stephen was not injured in the crash, out of grief, Stephen travelled the world and found "The Eye of Agamotto, cradle of the temporal singularity". Then, he began to study the manipulation and alteration of timelines "time travel". Wong warned him, that "Tinkering with time could weaken the very fabric of the Universe" as did The Ancient One. After the loss of The Ancient One, Stephen Strange saved the Universe from Dormammu, becoming the Sorcerer Supreme and the guardian of the Eye of Agamotto.

However, it soon became clear that Stephen still had trouble letting go of the past - so much that he resolved to save Christine's life from the night of the two-year anniversary of her death onwards. Unfortunately for him, no matter how he tried to change the events of the evening, Christine still ended up dead.

It was then The Ancient One suddenly appeared in front of Stephen, asking him if he was having car trouble, to which she explained to him, that it was with the death of Christine his journey toward the mystic arts began. Stephen begged The Ancient One to help him bring her back, but the Ancient One told him that she and nobody else could, because Christine's death was an Absolute Point in time, this made it unchangeable and unmovable and he would risk the universe if he tried. She also told him that without her death he would never have defeated Dormammu. Stephen did not believe her; he was convinced he could create a paradox. He told her nothing was impossible, which she had taught him, he only required more power. The Ancient One then warned him that this path would only lead to darkness and the end of their reality.

As Stephen activated The Eye of Agamotto, The Ancient One tried to stop him, but Strange told her, that she had to find him first. The Ancient One cast spells after Stephen hitting him right at the center of his chest where The Eye of Agamotto hang. Stephen then wakes up in a forested area. Confused, he looks around and sees a man looking at him, to which Stephen calls out to him saying he is looking for the Lost Library of Cagliostro. As the man leaves, Stephen follows him and as the come out from the forest Stephen sees an enormous building, but it has no door. He uses a spell and comes inside the building and calls out to see if anyone is there. As he looks at the floor, he sees different runes, and as he walks further in to the building he begins to fall. When he is at the bottom, the man from the forest comes back. Stephen tells him that he has come there to study Cagliostro, because according to legend, he knew how to break an Absolute Point in time. The man tells he is O'Bengh, librarian for the books of Cagliostro and shows Stephen the library. Stephen then starts to study the books. He discovers that immense power is needed is you are to break an Absolute Point in time and almost impossible to obtain, the power can be gained by absorption of other beings.

Stephen starts of by politely asking a being looking like an octopus (Shuma-Gorath), if it would mind sharing a tentacle or two? The being attacks Stephen. When he wakes up, he asks O'Bengh what happened, O'Bengh answered that mystic beings do not bargain. He then asks Stephen, if she is worth the pain? Stephen says "Every moment of it." O'Bengh then warns Stephen and say "there is a fine line between devotion and delusion. Love can break more than your heart. It can shatter your mind."

Stephen does not listen to the warning, instead he starts taking the power from different mystic beings by absorbing them. This goes on for a long time where he absorbs the power from numerous beings, this changes his appearance as possibly also his mind. When he's ready to go and change the Absolute Point in time he sees O'Bengh, who is now a very old man. Stephen offers to reverse it, so he will longer, even forever. O'Bengh answers him, that even in their world death is part of the plan. Stephen says, that he can't accept that. O'Bengh then says, he knows, but maybe the other Strange will. Stephen is mystified and says "the other?" O'Bengh then tells him if he cannot see he is only half a man living half a lift.

Almost as if a dream, Doctor Strange is then seen in his study seemingly contemplating the possibility of the events that unfolded as Strange Supreme. Wong says he'll start the kettle, he suggest to Strange, that he joins him, before he does something reckless. Strange agrees and walks outside to find the world degrading around him. An echo of the Ancient One appears and reveals the cause to be Strange Supreme, created through a spell that split Doctor Strange into two possibilities by the Ancient One themselves. She reveals that Doctor Strange will need to defeat his alternate self to prevent the destruction of his universe. Wong protects Strange with spells before he disappears. Strange Supreme then take Strange back to the place of the crash and tells him, they have to merge in order to save Palmer.

Strange refuses and try to convince Strange Supreme, how bringing her back to life will create a paradox that could destroy the universe. Strange Supreme is impatient and starts a fight with Strange. During the fight, Strange's Cloak of Levitation sacrifices itself in order to give him the possibility to escape, and the fight ends with Strange Supreme overtaking Strange's soul.

This gives Strange Supreme the ability to send out enough energy with the eye, thus breaking the Absolute Point and bringing Palmer back to life. As soon as she appears, she starts to vanish as the universe collapses, as Strange Supreme has created a paradox. Strange Supreme finally realizes what a mistake he has made and starts yelling at The Watcher to help him out, but The Watcher refuses before explaining that - while he would've helped if it were up to him - doing so would only lead to more destruction across the entire . multiverse

Realizing too late of his mistake, Strange Supreme could only watch as Palmer disappears from his arms before he then collapses with both sorrow over her death once more and more consequently with regret over his actions; he has been left alone in the void.

When Uatu retreats to Strange's prison after his defeat at Infinity Ultron's hands, Strange Supreme approaches him, to which Uatu reluctantly agrees to recruit his help.

What if... The Watcher Broke His Oath?

He was selected as part of the Guardians of the Multiverse and played a key role in the battle against Ultron.

Strange Supreme provided protection spells to all of the Guardians and used his mystic powers obtained from absorbing the creatures to deviate Ultron while the others went after the Soul Stone. He then trapped Zola and Killmonger in a pocket dimension and agreed to the Watcher’s request to look after them and make sure that they do not escape.

Stephen Strange is a master of surgical skills in the beginning of the episode. After he tragically loses the love of his life, he seeks answers in the mystic arts and eventually he becomes the Sorcerer Supreme. After travelling back in time to the Lost Library of Cagliostro, he absorbed countless mystic beings for centuries in order to gain more powerful to break an Absolute Point, eventually being able to do so after absorbing his alternate self. 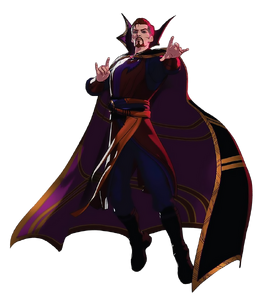