Scare their victims and then murder them.

The Strangers are a group of the three main antagonists that appear in the 2008 film The Strangers, and its 2018 sequel The Strangers: Prey at Night. The members consist of "Man in the Mask", "Dollface" and "Pin-Up Girl".

The actors playing the trio are as follows:

The three masked strangers begin harassing a couple, Kristen McKay and James Hoyt, from and within their summer vacation home. First, Dollface knocks on the door to ask if an unknown girl is home. When discovering that only Kristen and James currently occupy the residence, she leaves to join the other two, who had been hiding within the surrounding wood. Later, James leaves the home to get cigarettes while Kristen remains in the house. After a few more attempts to harrass the couple, the strangers later find their way inside, when Kristen is alone, and begin to move objects and lurk within the house, all in the effort to later terrify her. While Kristen enjoys a cigarette in the kitchen, unbeknownst to her, the Man in Mask begins silently observing her while lurking in the background, however he doesn't make himself known and simply vanishes before she notices his presence.

After James arrives, the Man in Mask begins chopping at the door with an axe while their car is destroyed by Pin-Up Girl, who rams it with a truck. In order to evade their persuers, James and Kristen hide inside of a room with a shotgun they had obtained to wait for dawn to arrive. Later on, James' friend Mike arrives to check up on them, and is stunned at the dissaray of the the home. Whilst walking about, Man in Mask had bee stalking him from behind. While searching the home, Mike enters the room in which James and Kristen were hidden, and is shot dead, being mistaken for one of the attackers, devastating James.

James attempts to go and get help, but is captured. Kristen tries to contact help, but is later captured, as well. The strangers tie up James and Kristen, and when Kristen asks why they are doing this, Doll-face simply replies calmly "Because you were home". The trio then unmask themselves (although their faces aren't directly shown to the viewer) and take turns in stabbing the couple with a blade. Once done, the couple were untied and the three leave. When driving down the road they come across two Mormon Boys. They stop and Doll face asks for a leaflet. When one of the boys ask if she is a sinner, Dollface replies "Sometimes". After getting the leaflet, the three of them drive off, with Pin-up Girl promising "It will be easier next time."

James and Kristen were later discovered by the two boys. Although James had died, Kristen had survived the ordeal and the police were contacted. It is not made clear as to whether Kristen lived much longer due to her severe injuries, and her fate is left ambiguous.

In this sequel, they hunt down a family in a trailer park belong to their slained relatives. However, in the end, they failed to kill the entire family and are finally killed by two children of the family with Pin-Up Girl being stabbed to death by the older brother, Luke; Dollface being blasted in the face with a shotgun and the Man in Mask being bashed to the death with a baseball bat by the younger daughter, Kinsey, ending their reign of terror for good.

Despite this, in the ending Kinsey is sat by Luke's hospital bed, and begins to hear a sound outside the room which is similar to a toy that Dollface used to bait her earlier in the film, which is then followed by a knock at the door, similar to one that Dollface did, which indicates that one of the members of the group are still alive or that it is just a visitor or a member of hospital staff.

The M.O. of "the strangers" is to approach isolated homes and knock on the door late at night. If the door is answered, they ask for someone who likely doesn't live there. When they are told that they are not home, they then pretend to leave and return to terrorize and, later, murder the inhabitants of the home. They do this by removing their masks, binding them up and taking turns slowly stabbing them until they die from their injuries. The way they torment their victims increases in intensity, starting off with moving objects inside the house and banging on the windows and doors, then escalating to staring at them from outside and chasing them around. The identities of the strangers are deliberately left ambiguous to make them more mysterious and frightening. Overall, the three characters are very mysterious with no apparent personalities, and very few observable details about their characters. They have no apparent motives for their actions other than sadism. Based on Dollface's response to Kristen's demands to know why they were targeted for this torment, it can be argued that The Strangers target completely random people who happen to be in the wrong place at the wrong time.

The strangers apparently enjoy the thrill they get from tormenting and stalking their victims, however all three killers are totally indifferent to the pain and suffering they cause, and, strangely, do not appear to enjoy it very much, as all three are totally detached emotionally from the things they do, suggesting that they are sociopaths. They take their time with what they do, as shown by how they terrorize Kristen and James from four in the morning until daytime, likely as late as ten in the morning, and taking the time to put Kristen into her nice dress before stabbing her. They also may take things from their victims, such as clothing. This is shown when the Man in the Mask changes from the brown suit he was wearing to a blue outfit that he may have taken from the closet.

Although serial killers are typically Caucasian males, there is only one man who wears some sort of cloth bag (similar to Jason Voorhees from Friday the 13th: Part II) over his head with a blank expression drawn on it, possibly a small grin. He is credited as "The Man in the Mask" but is also called "Sackhead" or "Baghead" by fans. The "Man in Mask" is the only member of the trio not to have a line of dialogue. A brief glimpse of the side of his face shows that he has a beard. The "Man in the Mask" is also the only member of the group to not wear a vintage style vacuform face mask with a pop-art design. All three masks are simple and unique and it is entirely plausible that the strangers made their masks themselves. Dollface is a young woman with long blonde hair, and the one who talks the most, although she still seldom speaks, and when she does, barely raises her voice above a whisper and talks in a low, flat tone with no emotion whatsoever.

She wears a cheerfully creepy mask of a big-eyed smiling woman with blushing cheeks, lipstick and pouty lips. Dollface is likely the craziest of the three because she appeared to take the most pleasure in tormenting Kristen and James. Dollface also took a pamphlet from the two Mormon boys, suggesting that she does not rule out the possibility that she and the others are doing wrong. The Pin-Up Girl is the most mysterious of the three, and only has a single line in the film, suggesting that "next time" it will be "easier. The Pin-Up Girl has short brown hair and wears a mask depicting a girl with curly black hair, lipstick, pink eye shadow and blushed cheeks with a blank expression.

As well as feeling no empathy for their victims, it appears the Strangers may feel little emotion to each other. In the sequel after to Pin-Up Girl is killed, the Man in Mask shows no reaction or emotion to her death, barely even batting an eyelid. When one of his victims tries to throw her death back in his face, this doesn't appear to show him much concern. It is unknown if Pin-Up Girl and Dollface have the same lack of emotion or care towards Man in Mask or each other. 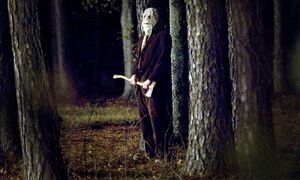 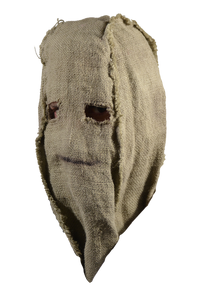 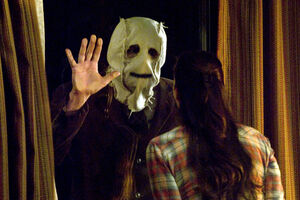 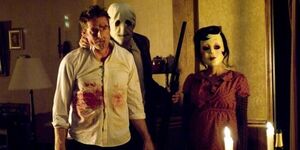 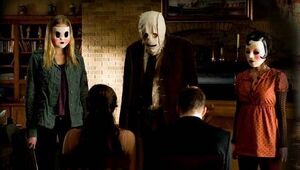 The Strangers in the original film 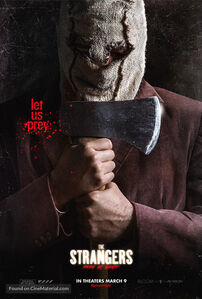 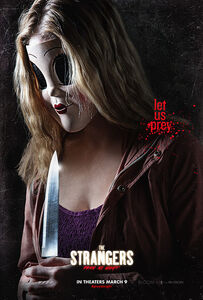 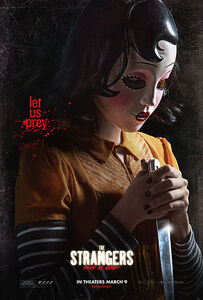 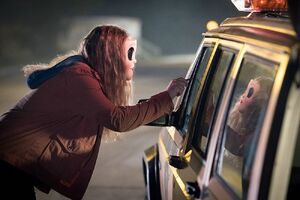 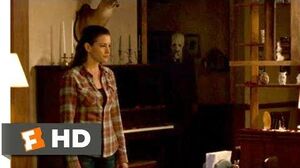 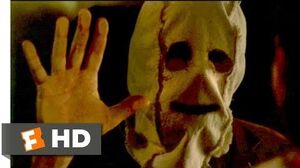 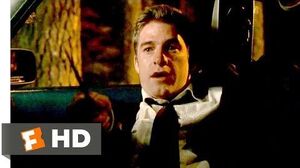 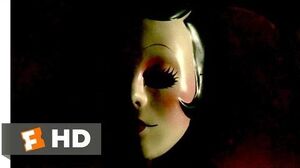 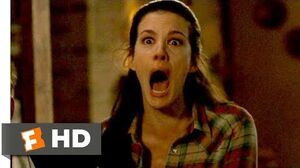 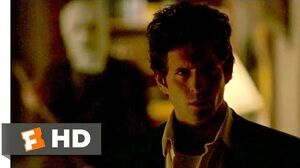 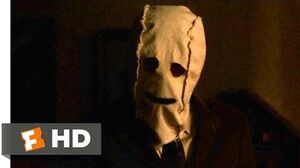 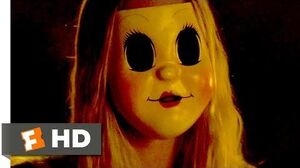 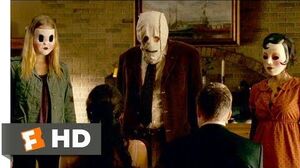 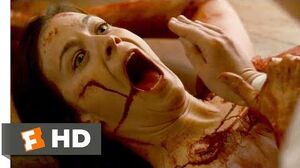 The Strangers 2: Prey at Night 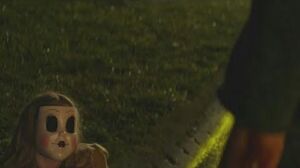 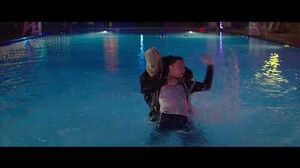 Retrieved from "https://villains.fandom.com/wiki/Strangers_(The_Strangers)?oldid=3240442"
Community content is available under CC-BY-SA unless otherwise noted.