The Mystic Voice
"Windbag" (by Ares when he sucks him up)

Tornado creation (by using his own tornado like body)

Get his revenge on Zeus and the Olympians for imprisoning him (failed).

Stratos, also known as the Wind Titan and The Mystic Voice, is one of the fictional Titans and one of the supporting antagonists from Disney's Hercules.

He was voiced by Corey Burton.

Stratos is a Titan with the appearance of a creepy-looking black anthropomorphic tornado with a red mouth and red eyes. He can summon tornadoes using his body.

Stratos and his brothers ravaged the mortal realm until stopped by Zeus and imprisoned. That is until Hades, soon after turning Hercules mortal completely, freed the Titans including Stratos. Stratos and his fellow Titans then overran and conquered Olympus under Hades' orders.

During the attack, Stratos was able to suck the attacking gods like a vaccuum cleaner before he, and the rest of the Titans, gathered them and binded them with chains to ease the effort to seal them into the Underworld. Fortunately, Hercules (who regained his powers) and Pegasus came to the rescue and freed the captives, resuming another battle against the Titans. However, unlike the other Titans, Stratos attempts to hold his ground as he tries to stop Hercules, but the hero who became immortal had Stratos's wind power turn against his fellow Titans by having the Titan suck them up into his body against his will. Once the deed is done, Hercules tosses the Titans to the sky where they explode, killing them as a result. 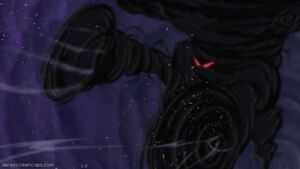