Ruling from his throne on Darkmount.

Complete his Space Bridge. (US comics)

Straxus is a Decepticon warlord and a major antagonist in Marvel's The Transformers comic book series. He rules the Polyhex settlement on Cybertron from his throne in the fortress Darkmount.

UK exclusive stories are in italics.

Straxus seized control of the Decepticons on Cybertron after Trannis was assassinated by the Wreckers. Straxus oversaw an incredibly brutal reign, having his forces hunt down any Autobots and neutrals so they could be melted down into spare metal.

After receiving a Decepticon transmission from Earth, Straxus had his forces capture the scientist Spanner so he could force him to construct a space bridge. Scrounge, a spy for the Autobots, learned of this plot, but was captured by Straxus' executive officer Shrapnel. Shrapnel brought Scrounge before Straxus, who destroyed his arm with a recording-device and sent him to be melted down in the smelting pools.

Eventually, the Autobot Blaster came searching for Scrounge but was also captured and sent to be smelted. He encountered a dying Scrounge, who informed him of Straxus' plans before passing away. Blaster was later rescued by the Autobots.

The space bridge was eventually completed, though it malfunctioned in its early tests. Meanwhile, a team of Autobots planted explosives in Darkmount and destroyed the building. While Straxus went off to pursue the Autobots, Blaster attempted to destroy the unattended space bridge. Straxus later confronted Blaster, and the two battled. Straxus initially overpowered the Autobot, but Blaster tricked Straxus into severing the fuel line to the space bridge before kicking him through it, destroying the tyrant.

However, in the UK comics, Straxus survived, albeit as just a head in a life support pod.

In Under Fire, when Megatron arrived on Cybertron, Straxus schemed to restore himself, initially obeying Megatron in hunting down Optimus Prime, who had arrived on the planet with him. After Prime successful raided the fuel store alongside the Wreckers, in Resurrection, Megatron began to grow more unstable, and Straxus became increasingly impatient. Despite the risks, Straxus activated a device that would exchange his and Megatron's minds, giving him a body once more. However, Megatron resisted the transfer, destroying Straxus's head, and the two minds within Megatron's body fought for dominance. After the maddened Megatron prepared to unleash his unstable antimatter powers on the Autobots, Ratbat activated the space bridge, teleporting them back to Earth, with Straxus's mind presumed destroyed.

As revealed in Two Megatrons, having failed to gain control of Megatron, Straxus activated a contingency plan, "Project Re-Birth," and his consciousness fled into a duplicate of Megatron created from one of his troops, complete with a copy of his brain patterns, beneath which Straxus's personality lay dormant.

In Salvage, after the Megatron clone had been sent to Earth, after the original's seeming death, Shockwave recovered it, believing it to be genuine. Shockwave subjected the clone to the psycho-probe, intending to force Megatron to face his fears. This released Straxus, who intended to take control of the body. Megatron, fully believing himself to be the original, fought back, ripping the mental image of Straxus to pieces and taking over their shared mind.

However, as revealed in Two Megatrons, this had only delayed Straxus, and he waited in the clone's mind, slowly weakening it, until the right time. When the original Megatron returned, and revealed the truth to his doppleganger, Straxus made one last attempt to gain control of the Megatron clone which was thwarted when the clone shot himself with his own fusion cannon, killing him and Straxus for good. 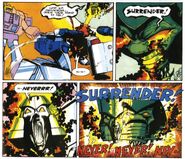 Straxus transfers his mind to Megatron.