Alien Destroyers
The Streamriders are the main antagonistic force in the MDK franchise.

The Streamriders are aliens who come from the planet Swizzle Firma. They travel the universe by using energy streams (hence their name), and have set their sights on Earth's natural resources. They attack the planet using Minecrawlers, city-sized mining vehicles equipped with heavy weapons which drain the land's resources while crushing anything on their path.

Their arrival is noticed by Dr. Fluke Hawkins, who was on Earth's orbit aboard his Jim Dandy space station conducting experiments. While the doctor sent a warning back to Earth, Earth's military proves inneficient against the huge Minecrawlers, so the doctor creates a special Coil Suit, giving it to his janitor Kurt Hectic, who is then reluctantly sent to infiltrate the Minecrawlers and destroy them, with the help of the robotic dog Max.

Gunter Glutt is the main villain and final boss from MDK.

Gunter Glutt is one of the Streamriders, and the commanding force behind the Minecrawlers attacking Earth. In order to stop the aliens invasion, the hero Kurt Hectic infiltrates and sabotages the Minecrawlers, eventually facing Gunter inside the fourth Minecrawler. However, Gunter captures Kurt's friend Max (a four-armed canine robot) and escapes to another Minecrawler. Kurt pursues him and once again confronts him. After freeing Max, Kurt tricks Gunter into eating Max, who then blows Gunter from the inside. With Gunter Glutt's death, the invasion is halted, with only one Minecrawler left on the surface.

Zizzy Balloobba is the main villain and final boss from MDK 2.

Zizzy Balloobba is the emperor of Swizzle Firma and ruler of the Streamriders. As he himself claims, he has mastered space and time, and thus became incredibly bored as a result, so he decided to use his vast knowledge to invade other planets and conquer them merely for the fun of it. He's a large green alien with no legs who sports a large grin and wers a crown.

Zizzy only appears at the final mission in the game, serving as the final confrontation. The three heroes discuss with him and get enraged that his only reason for invading Earth was for his own amusement, deciding to fight him. Zizzy ends defeated, the ending differing between the three characters. In Max's ending it is shown that after Zizzy's defeat Max decided to take over Swizzle Firma, becoming it's new emperor and making a peace agreement between the humans of Earth and the Streamriders.

Balloons For Brains (shortened to BFB) is one of the main villains from MDK 2.

BFB is one of the Streamriders, a short green alien riding a floating chair with a bulbous head with it's twin brains exposed. BFB was sent by Schwang Schwing to invade the Jim Dandy and capture the Dr. Fluke Hawkins, who was thwarting their plans. BFB acts as a rival to Dr. Hawkins throughout the game, wanting to prove his intellect superiority over the doctor's "simian" brain.

BFB invades the Jim Dandy along with his soldiers, forcing Dr. Hawkins to fend off the invaders. He encounters and defeats BFB, but ends captured. Max returns to the Jim Dandy only to find the place full of aliens, finding the doctor trapped by BFB. BFB had created his own dog robot which he called Bad Max, who he pits against the original Max. Max destroys Bad Max and releases Dr. Hawkins, who chases BFB around the ship while he sets various bombs which the doctor must disable. BFB, recognizing Dr. Hawkins intelligence, challenges him for a final match, but ends defeated, after which Dr. Hawkins removes his brains for research and throws his remains into space.

Schwang Schwing is one of the main villains from MDK 2.

Schwang Schwing is one of the Streamriders, acting as a right-hand to their emperor Zizzy Balloobba. Schwing appears as a giant humanoid purple alien wearing red shades, which he only takes out to shoot eye beams. He first shows up after all Minecrawlers are stopped, easily capturing the hero Kurt Hectic after he kills Hanz, the pilot of the last Minecrawler. He also captures Max when he invades their mothership and sends Balloons For Brains to invade the Jim Dandy and capture Dr. Fluke Hawkins.

After Dr. Hawkins defeats BFB, he teleports Kurt back and send him to save Max, but Schwing shows up and attacks them. Kurt defeats him, so he creates a warp portal to escape, which Kurt follows. Both are taken to Swizzle Firma, the Streamriders homeworld, where Schwing takes a ride on an airship and chases Kurt around their metropolis. Once Kurt finds a clearing, he shoots down the airship, defeating Schwing, who tells him he's merely following orders.

Max also arrives at Swizzle Firma, where he learns the aliens were planning to obliterate Earth with a nuclear space rocket, so he traverses the place and reach the rocket, which was being operated by Schwing, now bound to a floating wheelchair and with a plaster on one of his legs. After defeating Schwing for good, Max hijacks the rocket, preventing it from being fired at Earth. 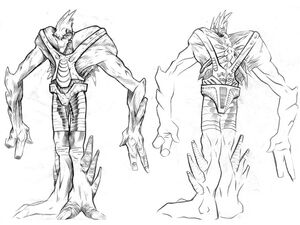 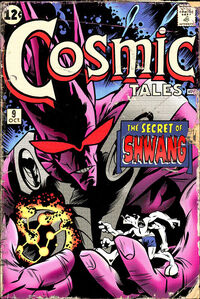 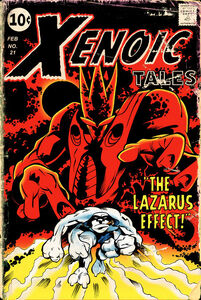 Level 8 loading screen
Add a photo to this gallery
Retrieved from "https://villains.fandom.com/wiki/Streamriders?oldid=2622993"
Community content is available under CC-BY-SA unless otherwise noted.