Pavel Pavolovich "Pasha" Antipov, also better known as Strelnikov, is the hidden antagonist in the 1957 Boris Pasternak novel Doctor Zhivago, as well as its 1965 film adaptation of the same name.

Pasha is an idealistic, anti-Czarist reformer who slowly drifts into left wing extremism as he becomes a Bolshevik commander named Strelnikov (a figure Boris Pasternak based on Joseph Stalin).

Pasha first appears in a city slum, along with several Mensheviks, handing out fliers advertising an upcoming peaceful protest demonstration until local authorities conficate them. Pasha is about to be arrested until his fiancee Lara intervenes and offers to take him home as long as there was no more trouble. Later on Pasha is leading the peaceful Menshevik protest demonstration in Moscow involving impoverished Russian workers unsatisfied with the Tsar's leadership. Pasha is injured when he and the Menshevik workers are attacked in the city street by a Czarist Cossack cavalry unit. Whilst fleeing, he picks up a revolver dropped by one of the protesters. He then heads to the dressmaker's shop where Lara works to tend to his wound (a scar on his face) and he gives her the revolver he picked up during the massacre, warning her that the upcoming Russian Revolution will no longer be peaceful.

On Christmas Eve 1913, Pasha (who has since joined the Bolsheviks) meets up with Lara and her benefactor Viktor Komarovsky. Pasha informs Viktor that his love for Lara is second only to his allegiance with the Bolsheviks (unaware that Lara and Viktor have been having an affair in secret). Pasha chances upon an upset Lara in a city street heading towards the Sventytski residence, where a Christmas party is being hosted. In retaliation for being raped by him Lara shoots Komarovsky at the party only to be escorted out of the building by Pasha. Pasha reads the letter Lara left him at home revealing her affair with Komarovsky and while enraged, Pasha forgives her and marries Lara and she gives birth to a baby girl named Katya, however in 1914, when World War One was underway, Pasha later abandons Lara and Katya and signs up for a volunteer regiment.  Another person who was ordered to serve in World War One was Yevgraf Zhivago, half brother of Doctor Yuri Zhivago, (who narrates the story to Tanya Komarova, a woman whom he suspects to be Yuri Zhivago and Lara Antipova's illegitamite child)

During World War One, Pasha is reported M.I.A (missing in action) when he and his platoon attempt a daring charge attack on German forces in No Man's Land (unbeknownst to many this was staged by the Communist Bolsheviks as the start of the 1917 February Russian Revolution and became more clear when the troops deserted the frontline and murdered their commanding officers). This results in Lara enlisting as an army nurse in an attempt to find Pasha, during which time she comes into contact with Doctor Yuri Zhivago on the Ukrainian front, with whom she runs a battlefield hospital for 6 months and starts to fall in love with despite the fact both of them are already married.

Later on in the newly formed Soviet Union, Yuri returns to his stepfather's stately home to find that the house is divided into tenements and as a result, occupied by 13 additional families following the aftermath of the 1917 October Russian Revolution; the Bolsheviks, under the command of Vladimir Lenin, are now in full control of the large cities and collectivisation has begun. Due to his poetry being censored by the Soviet government and condemed as anti-communist, (as well as stealing fence boards for firewood) Yuri and his family are now in danger of being exterminated by the Soviets. With the help of his half-brother Yevgraf (now a CHEKA policeman and Bolshevik official), Yuri, his wife Tonya Gromecko and her family flee their Moscow estate to Tonya's Varykino estate in the Ural mountains which involves a train ride in a crowded boxcar through contested territory (contested due to the Russian Civil War between the Imperial Whites and the Communist Reds), which is being secured by an infamous renegade Bolshevik commander known as Strelnikov. One such place was a town called Minsk which was apparently burnt down by Strelnikov and the Reds because the residents were selling horses to the Whites.

One day Yuri stumbles across Strelnikov's armoured train and, after being summoned before the Bolshevik commander, is shocked to discover that Strelnikov is none other than the formerly idealistic Pasha Antipov. During a tense interview, Yuri and Strelnikov realise that they have previously met each other at the Christmas party where Komarovsky was shot. Strelnikov then reveals that his estranged wife Lara is living in a town called Yuriatin, which is occupied by the anti-Communist Whites. He also implies that he had severed personal ties with Lara by stating that the personal life is dead, meaning that, ever since becoming a high ranking Bolshevik commander he had stopped using his real name Pasha Antipov. Suspicions that Yuri is an assassin or spy working for the Whites are determined to be groundless so Strelnikov permits Yuri to return to his family, however Strelnikov's right hand man implies that most people who are interrogated by Strelnikov end up being shot.

Some time after Yuri is reunited with Lara (continuing their love affair in Yuriatin) and Katya, a drunken Komarovsky (now a Bolshevik)  informs them that, as a result of Strelnikov now being considered a dangerous liability to the Bolshevik cause, the CHEKA (Soviet secret police) have been keeping an eye on the couple due to Lara's connection to Strelnikov via marriage and Yuri's counter revolutionary poetry and desertion from Communist partisans after being conscripted by the Reds while he was heading back to Varykino to be with his wife Tonya, and that Lara is only being spared by the Bolsheviks in order to lure Strelnikov out of hiding. Sometime after Yuri, Lara and Katya flee to the abandoned Varykino Estate in the Ural mountains (Tonya and her family had since been deported to Paris), Strelnikov is eventually lured out of hiding by the Bolsheviks and while on route to his own execution commited suicide by taking a gun from one of the officers and shot himself with it, but not before identifying himself as Pasha Antipov and that was searching for his wife Lara Antipova (meaning that Lara was now in danger of being executed by the Bolsheviks herself). As a result Yuri sends Lara and Katya away with Komarovsky to take them to safety out of Russia into Mongolia. 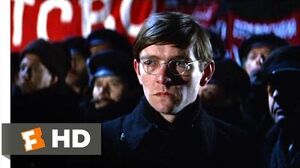 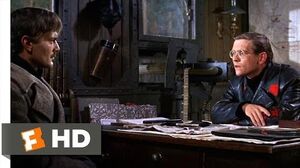