Noble of the Volakian Empire.

Insulting those he believes to be lower than himself.

Destroy the Kingdom of Lugunica (failed).

Arrogant Aristocrat
Stride Volakia, also known as the Wolf of the Empire, the Sin Archbishop of Pride and Death Wish, is a major antagonist in the Japanese dark fantasy franchise Re:Zero − Starting Life in Another World. Although he does not appear in the main 2014 light novel series, he acted as the main antagonist of The Love Ballard of the Sword Devil, the third volume of the spin-off light novel series Re:Zero − Starting Life in Another World Ex.

Stride was born as one of the many children of the Emperor of the Volakia Empire. However, as he was sickly, he never became the heir and his existence was never officially acknowledged by the Empire. At some point, he joined the Witch Cult, an organization dedicated to exalting the The Witch of Envy. The Cult was led by the Sin Archbishops, a small group of individuals who each possessed a power known as a "Witch Factor." Each Witch Factor was related to one of the seven deadly sins, and each Archbishop represented one of the sins. Stride Volakia possessed the Pride Witch Factor and was subsequently referred to as the Sin Archbishop of Pride.

As his title entailed, Stride was an incredibly prideful man. He saw himself as inherently superior to all others and as such often underestimated his opponents. Although he never displayed use of it, Stride presumably had access to the Authority of Pride. Around forty years ago, Stride summoned an evil dragon that almost laid waste to the Kingdom of Lugunica. However, in an ironic twist of fate, Stride himself was devoured by the dragon.

From a mere glance, Stride Volakia could easily be recognised as a man of status of around thirty years of age. His features, which helped distinguished his importance, were uncommonly sharp and noble. He had long, rich deep-purple hair that had a silky look to it and reached past his shoulders. His slim body had, ever since his youth, been riddled by illness that made even the simplest of physical activities gruelling for the Wolf of the Empire. His voice betrayed his imperialism and thus also his connection to the meritocratic Empire of Volakia.

In reflection of his physical appearance and noble carriage, Stride wore clothing of princely refinement. His outfit, that was primarily black, consisted of black trousers, black shoes, a light grey shirt, a black cravat, a white waistcoat over the shirt, and a black long coat over the waistcoat that had notched lapels and rolled cuffs. Some of his clothing had purple lining that matched the color of Stride's hair. On his left shoulder, Stride had a large black feathery decoration. On each of his ten digits, Stride wore a magical ring that he could use to afflict curses on his enemies. 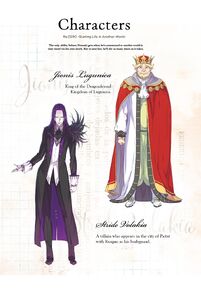 Characters summaries of Stride and King Jionis Lugunica in The Love Ballard of the Sword Devil.