Strider Hien is an antagonist from the Strider series, making his debut in Strider 2. A former Strider and friend of Hiryu, Hien betrayed them out of jealousy and sought the resurrection of Grandmaster Meio.

Hien was a member of the Striders and one of its top agents, a Special-A Class member much like Hiryu. Considering each other comrade-in-arms, he and Hiryu were joined in missions several times. Hien, however, started to develop jealousy over Hiryu's status within the Striders, being the youngest member ever to attain the greatest rank in the organization. As a result of this he betrayed the organization and joined the secret society that ruled the world in Meio's name. Although specifics are unknown, his actions also led to the almost entire annihiquilation of the Striders, leaving Hiryu as the sole survivor intent on carrying the group's last mission: eliminate Grandmaster Meio.

Hien would then lead a survey team in South America in search of the ruins of El Dorado, the resting place of Grandmaster Meio. While Hiryu also arrived at this area and eliminated all opposition, he reached Meio's burial chamber too late and could only witness as the dark lord left the chambers. Hiryu confronted Hien in battle but the traitor eventually called the battle off, telling his former friend it was pointless now that Meio has left. Hien tries to talk Hiryu out of carrying the Striders' last mission, but Hiryu simply turns him down and warns him that, next time they meet, he fight at his fullest.

Some time later Hien attends a meeting of the top heads of the secret society discussing Hiryu's actions against them, after he blew up one of their secret laboratories. Hien tells them that Hiryu is a survivor of Striders just like him, but the head of the meeting ignores his warnings. After Hiryu destroys the Flying Battleship Balrog, Hien wonders why Hiryu is doing this and notes how Hiryu is merely "dreaming".

After Hiryu infiltrates the Third Moon, Grandmaster Meio's space base, Hien appears to oppose him on its way to the Grandmaster's control room. Wasting no more words, Hien fights Hiryu one last time and is defeated, although his fate or survival afterwards is uncertain.

Hien is a man of medium height and a lean, muscular build. He sports black hair tied into a ponytail and blue eyes.

Hien's official uniform is only seen in cutscenes and official artwork: he wears a large, four-buttoned jacket with baggy pants, black tabi with metal protections, a loose-fitting segmented belt, black leather gauntlets, leather strap-ons on each shoulder and a long scarf. He sports a circular gray badge on his chest with a stylized red "S". His whole uniform is white, with the jacket sporting black outlines. This is also his look in crossover appearances.

His in-game sprite, on the other hand, is a head swap of Hiryu's sprite, and as such differs from his official look: he dressed in a sleeveless uniform like Hiryu's but white with brown accessories, a white scarf and a metal belt. Like Hiryu he sports the first kanji character of his name brazened n his chest, colored brown.

Like other Striders before him, Hien shows a strong determined personality, being undeterred in achieving his goals even if he has to kill his former friend for them. Although a very talented and skilled Strider, Hien showed signs of an inferiority complex when compared to Hiryu. He grew jealous of his friend's achievements as the youngest member to ever reach Special-A Class and the praise that came to it. These emotions were exhacerbated by a perception that he could never keep up with him in ability, feeling he could not catch up and reach his level no matter what he did.

Regardless of how he felt, however, Hien still considers Hiryu a comrade and friend and tries to talk him out of antagonizing him and Meio, to little succeess. Although he doesn't seem to genuinely want to fight Hiryu, he will eventually throw that aside and fight him with the intention to kill. Hien's loyalty to Meio is absolute and he accepts him as the Creator of the entire world and all that exists, which is another reason he believes he is in the right in trying to persuade Hiryu from opposing him.

Hien’s status as a Special-A Rank Strider makes him a insanely strong fighter, closely similar to Hiryu in power and speed. As expected of a ninja, Hien is both quick and acrobatic, possessing an array of physical moves including cartwheel jumps, wall jumps and a slide maneuver. He's probably also a martial arts expert like Hiryu, but he's never seen fighting barehanded.

Hien is an expert swordsman in the use of the Geometrical Cypher, an unique dual model of the Striders' plasma sword Cypher. These two smaller Cyphers can be joined together by the hilt and used in a variety of forms for both offense and defense. Depending on how they are joined they can be used to produce plasma trails, shoot beams of plasma, create a defensive shield or perform consecutive sword strikes. The weapon's signature ability, however, is their capacity to be thrown as boomerangs: the Geometrical Cypher will fly while spinning like a disc and bisect anything on its path, then fly back to Hien. 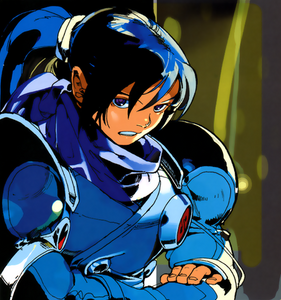 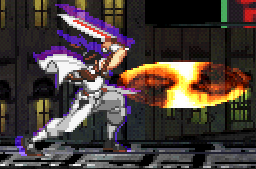