Control over his blaster

Summoning and hunting down heroes.

Eliminate and steal the powers of all the Cartoon Network heroes (failed).

Strike is a minor antagonist in the 2017 Cartoon Network series OK K.O.! Let's be Heroes, serving as the main antagonist of the episode "Crossover Nexus". He is a mysterious villain bent on eliminating all the heroes from the Cartoon Network multiverse, who summons them from their universes to destroy them.

In "Crossover Nexus", Strike is seen trying to hunt down two shadowed heroes in a destroyed Cartoon Network City. However, growing annoyed with their hiding, he decides to summon another hero to hunt instead, summoning K.O. from Lakewood Plaza Turbo. He quickly introduces himself and points his blaster at K.O., who nervously proclaims that he's only a hero in training, though Strike doesn't care. Before K.O. can be blasted, he is saved by the two heroes, who subsequently introduce themselves as Garnet and Ben 10, and Strike sends his blaster after all of them. While the heroes are in an alleyway together, Strike's blaster tracks them down, destroying Ben's Omnitrix, leaving him stuck in his Four-Arms form, as well as Garnet's glasses, thus robbing her of the clarity and focus she requires to use her future vision.

The heroes manage to escape the blaster and enter an abandon building, which they find is filled with all of Strike's previous victims, all in petrified form with red x's on their bodies. While K.O., Ben and Garnet are pondering how they are going to defeat Strike, a voice suggests that they attack him at his lair, said voice coming from Raven, who is non-petrified due to having cast a protection spell on herself before being hit with an x. The other heroes free her from her imprisonment, and she explains that the city they're in used to be full of great heroes, until Strike came along, stealing all their powers before eliminating them. Afterwards, he decided to start summoning heroes from other universes to defeat them too, as he had summoned Raven and robbed her of most of her powers as well, leaving her only able to levitate.

Following up on Raven's suggestion, the heroes, nicknamed "O.K. Ben Let's Go Universe" by K.O., head to Strike's lair, evading the traps and monsters he created to protect it. Unfortunately, Strike corners the team using his blaster, and begins powering up to destroy them all. While he does this, K.O. realizes that Strike's blaster has the capability to create and destroy, given how all the previous traps and monsters he set up are red like the blaster's beams (and the fact that it looks like a giant pen anyways), and uses it to return all of the heroes' powers.

After powering up, Strike arrogantly prepares to destroy the "powerless" heroes, but is surprised to find that their abilities have returned, allowing them to overcome his attacks. Ben attempts to transform into one of his alien forms, only to find himself transforming into heroes they had seen before, which K.O. explains is because, when he used to  to restore the Omnitrix, the powers Strike stole, came with it. Using this knowledge, K.O. rockets him off towards Strike with a power fist, and, transforming into all the different heroes from before, Ben delivers the final blow to Strike, destroying him. Afterwards, Garnet reprograms the blaster to restore all the heroes and the CN City, and also creates a POW Card of herself for K.O. before returning home with Raven's magic.

In the Final Episode "Thank you for watching the show", it is revealed that Strike is still alive. 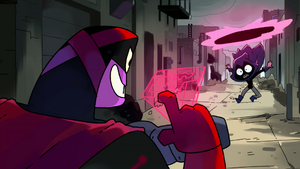 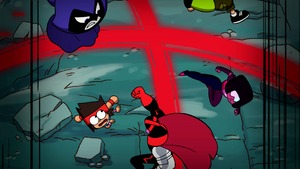 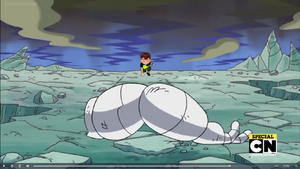 Strike defeated to death by Ben.
Add a photo to this gallery

Retrieved from "https://villains.fandom.com/wiki/Strike_(OK_K.O.!_Let%27s_be_Heroes)?oldid=3301062"
Community content is available under CC-BY-SA unless otherwise noted.