Showing off his superiority to other Imps.

Convince Blitzo to join him (failed).

Striker is one of the main antagonists of the animated adult webseries, Helluva Boss.

He serves as the main antagonist of "The Harvest Moon Festival" the fifth episode of first season. When he plots to return soon to get revenge on The I.M.P Crew and Stolas.

Initially appearing as a supporting farmhand at Rough n' Tumbleweed Ranch, Striker is secretly a hitman who carries special angelic weaponry, desiring to use such tools to kill all forms of Hell's hierarchy. Under the orders of Stella, Striker was ordered to assassinate her husband, Stolas, whilst also plotting his own schemes to convince Blitzo to join him. He is the archenemy of Moxxie.

He is voiced by Norman Reedus, who also played Scud in Blade II.

Striker is an arrogant individual who sees himself as superior to most of his kind and does not hesitate to mock and belittle those who are physically weaker, as he immediately has it out for the timid Moxxie, as he goes out of his way to humiliate and upstage Moxxie every chance he can from the moment they meet for seemingly no reason. Blitzo meanwhile seems to have gotten the man's respect, as Striker went as far as convincing Blitzo to work with him and was disappointed when Blitzo refused.

As an assassin, he prefers close-range combat as most of his fights seen to date were hand-to-hand. However he is willing to use ranged weapons when needed, such as killing Stolas at sniper distance. He also seems to be good at singing.

He's shown to be fearless like when he kept a cool-head when he was about to kill Stolas and Blitzo caught him in the act, although his sudden appearance shook him a bit. Another example is when he was cornered by Blitzo and Moxxie and only looked distressed by the fact that the cards were not in his favor.

Like other Imps, Striker has red-tinted skin, yellow eyes, two horns on his head and a long tail. Compared to others however he is a lot more pale, his eyes are slit like those of a snake and his tail is adorned with spikes. He wears a white cowboy outfit complete with a brimmed hat, a short red scarf, a vest and torn pants.

Striker is shown to approach fighting with extreme gusto when his opponent is evenly matched with him, like Blitzo, but when they aren't, he positively revels in taking them down slowly, Striker also is very good at singing and playing guitar as seen in his song "Sweet victory", he also is inteligent enough to nearly tricking Blitzo into joining him.

Nothing is known about Striker's past except that he was an assassin.

Sometime presumably during or after the events of "Loo Loo Land", Stella hired him to kill Stolas. He was then hired as a new farmhand by Millie's parents, Lin and Joe.

Striker introduces himself to Millie, asking if freelance work in Imp City had dried up, which she says isn't true, and they got tickets for the festival, jokingly stating it's because the Prince is her boss' lover. Blitzo firmly tells her to change the subject, as he isn't above hitting her in front of her parents. Striker then asks him about I.M.P after having heard about a Imp starting his own business; subsequently he compliments Blitzo for his great achievement, stating that not many Imps are able to do so. Striker asks him about how exactly he's conning Stolas into letting them access the Living World, which flusters Blitzo, who poorly explains the arrangement he has with Stolas.

As Moxxie lands in the mud of the corral hurting his arm, as Striker walks past him with the hog on his shoulder, telling him he never stood a chance, angering him. Striker asks Blitzo if he wants to help skin the hog, which he agrees to.

Striker then goes to the Harvest Moon festival and wins the games along with Blitzo, Striker then sings a song that says how he loves victory and how he is better than anyone to presumably insult Moxxie.

To Moxxie's disappointment, Blitzo reveals he asked Striker to take a job with I.M.P, which he accepted. Millie suggests Moxxie to go back to the house and clean himself, as Striker taunts him in his song, making him leave crying and humiliated.

Back at the ranch, as Moxxie climbs the stairs, he notices a glow coming out of Striker's room. Investigating, he finds an open gun case with a Carmine crafted blessing tip rifle, a sniper rifle capable of killing Demon royalty. Striker confronts him, and attempts to kill him for his discovery, when Millie intervenes after hearing a lamp breaking and stabs him in the back, before being overpowered by Striker. He proceeds to throw the pair in the Ranch's cellar, where Millie lands in a bear trap, reasoning that they aren't worth the cleanup and alive they might give him leverage over Blitzo.

In a nearby building, Striker lines up a shot on Stolas with his sniper rifle, when Blitzo confronts him. Striker remarks he thought he was still at the ceremony, and Blitzo responds that he can't stand Wrath's residents and Stolas at the same time. Striker asks Blitzo if he's disappointed in him, which he agrees with, as he's about to kill his ticket to earth behind his back. Striker tells him he's better than what he was limiting himself to do, remarking that he shouldn't be forced to fuck royalty and work for sinners who don't care for him, struggling to run a business rigged against him, when they could partner up and kill Overlords. Striker subsequently corners Blitzo to the wall, suggesting him they could start by killing Stolas.

Blitzo pretends to agree with him, as Moxxie sneaks in and grabs the sniper rifle. Once Moxxie has it, Blitzo elbows Striker after he almost made him shoot Moxxie. After a brief fight, Striker beats down the pair and gets his rifle back. Holding them at gunpoint, Striker mocks them commenting that they lost the upper-hand quickly, when Blitzo tells him he's forgotten something, whistling for Loona. She hears him, but initially ignores it. Striker tells him they could have made a good team, to which Blitzo disagrees and submits him by kicking his shin and chest, pushing him to the other side of the room and making him drop the rifle. Moxxie catches it, and fires a warning shot next to Striker's head. Taunting Striker, Moxxie asks him who's weak now, when Loona arrives, kicking open the door and knocking him over who was next to it. Striker takes the opportunity to flee, jumping out the window and into the crowd gathered for the festival.

In the end of the episode, he is revealed to be an assassin hired by Stella to kill Stolas for cheating on her with Blitzo, and says to Stella that "he will get them next time". 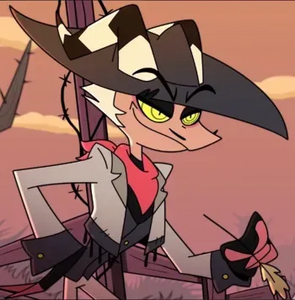 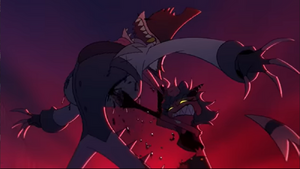