Strings the Quiet One is a mime who is one of Marik Ishtar's mind slaves in Yu-Gi-Oh!.

He was voiced by Jonathan Todd Ross.

Marik controlled him with his Millennium Rod and made him duel Yugi using a deck that had Slifer the Sky Dragon, one of the Egyptian God Cards in it. He used a lethal combination to gain the advantage and was seemingly unbeatable, but Yugi found a way of dooming Strings to run out of cards, making him lose the duel.

Yugi then took Slifer the Sky Dragon from him, as the loser of a duel must hand over their rarest card. Marik then released him from his control. In the video game Yu-gi-oh! The Falsebound Kingdom, he appears in Yugi's campaign but as Yami Bakura's mind slave. You fight him in the level "Scorched" in Yugi's campaign.

He uses the monsters Labyrinth Tank, Slot Machine, and Curse of Dragon. After defeated, Yami Bakura speaks through him and explains his alliance with Scott and tells Yugi that he will be close to destroying the resistance; though this fails. It is unknown whatever happened to Strings. 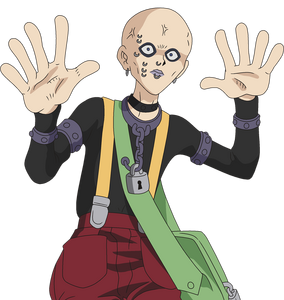