Stu (Bomby in French Version) is a large red bird who lives in a golden cauldron filled with bombs (which keeps him clothed) and is the third boss of Donkey Kong Country Returns found in the third world, the Ruins area. Gong-Oh hatches and then hypnotizes him, causing him to attack the apes. He is eventually defeated, allowing Donkey Kong to send Gong-Oh flying out of the Ruins.

Stu is fought in a large squre room, with some platforms on the bottom. He flies around at the top of the screen, throwing bombs and Tiki Pops down towards DK and Diddy, occasionally diving down and trying to hit them. Both of the Kongs must pick up and throw bombs back at the bird in order to defeat him. Once he is defeated, a cutscene shows the cauldron breaking apart and revealing a bulbous pink body without any feathers as Donkey and Diddy turn away and continue on with beating on Gong-Oh. 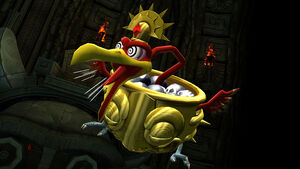 Stu after he was created.
Add a photo to this gallery 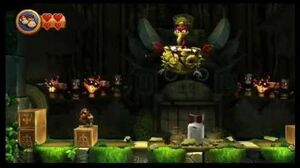 Retrieved from "https://villains.fandom.com/wiki/Stu_(Donkey_Kong)?oldid=3392213"
Community content is available under CC-BY-SA unless otherwise noted.