Stu, also called the "Huge Goon", is a supporting antagonist in the 2010 movie Kick-Ass.

He was portrayed by Stu "Large" Riley.

A henchman of Frank D'Amico, he was the only goon guarding Red Mist and Frank D'Amico while Hit Girl killed all the other henchmen except for three that have come with heavier guns. Once Hit Girl runs out of ammo, she is forced to hide somewhere. Stu and the other two gunmen sent the coward goon to shoot where Hit Girl is hiding.

The coward goon kept shooting everywhere, but then Hit Girl threw two knives at him. This influenced Stu to get out a bazooka. Red Mist first objected that the situation will become even more out of hand if Stu uses a bazooka, but Frank approves and gives permission to do so.

With the possession of a bazooka in his hands, he mimics Tony Montana's famous quote, "Say hello to my little friend!!" when he finally was going to shoot Hit Girl. But then Kick-Ass came flying in a jetpack outside the building. Once Stu saw Kick-Ass lower the guns carried on his jetpack, Stu and the two gunmen were about to shoot him but were too late. Stu was the first one to die, and the entire room where the rest of the henchmen were are all killed by the shell bullets from Kick Ass's jet pack guns. Frank D'Amico thinks that it was the bazooka firing, but was wrong.

Kick-Ass then used Stu's bazooka to shoot Frank D'Amico out of the building when the evil mobster was going to kill Hit Girl. 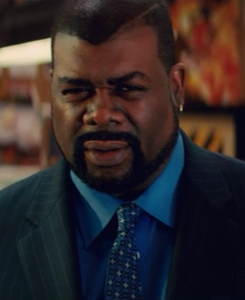