Getting knowledge about guns.

The Student is the main antagonist in a short film Evan. It is about how no one noticed red flags of a suspect for a future event of creating a school massacre.

The film starts off in a school with the main character Evan writing on a desk I am bored, while behind him the student is reading a book about guns. The next day, Evan finds out that someone actually replied to his message.

Evan would eventually start communicating with the person trough messages on the desk, speculating about who is the person behind. Eventually, Evan writes that they should do nothing together, while the student behind him is watching a YouTube video about guns.

Evan appears in his home, looking posts on Instagram witch escalate of seeing the student with a gun witch Evan totally ignored. The next day Evan looks behind thinking who the person can be, while the student gets bullied by other students behind of him.

Evan gets to the library where he wrote all the messages with the person, finding out that it's out of order. Eventually, Evan signatures on a girls notebook, while the other girl next to her realized by his signature that Evan is the guy that she texted with.

As the three chatted out of nowhere, the student appears opening the gym door, throwing his bag onto the ground and charges his gun, creating a new school massacre. 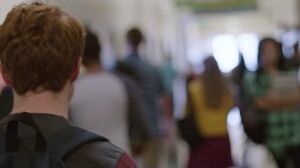 Evan
Add a photo to this gallery

Retrieved from "https://villains.fandom.com/wiki/Student?oldid=4022904"
Community content is available under CC-BY-SA unless otherwise noted.