Studio guardians are minor antagonists from the SCP Mythos. They are the enforcers of SCP-024.

The Studio guardians appeared inside the building when the announcer call out on the contestant that break one of the contest rules. the guardians will then forcefully removed the offending contestant from the game, never to be seen again.

The Studio Guardians are the rule enforcers of SCP-024. their roles by the Announcer are to materialize inside the Building when a contestant break one of the rules of the contest (such as bypassing obstacles or assaulting other contestants. )The Guardians will then grab the offending contestant and disappear, with the contestant never to be seen or heard from again.

So far, the Studio Guardians only appear when only a contestant break a rule of the contest and the origin of these guardians along with SCP-024 are unknown.

The Studio Guardians along with SCP-024 are contained within the abandoned sound stage that was abandoned in 19██ for unknown reasons.

The Studio guardians materialize as huge shadowy humanoid figures that wears a masks or headgear to cover their face.

It's unknown if they ever have a personality at all, other than the fact that they obey SCP-024 orders.

Appearance of the Studio Guardians 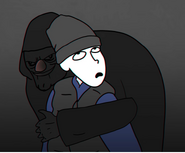 a Studio Guardian taking away a contestant