The Stuff is the titular main antagonist of the 1985 satirical sci-fi horror film of the same name. It is similar and parodied in some ways to the Thing, Xenomorphs and The Blob as it is a parasitic life-form that exists under the ground but becomes deadly once eaten and will grow to the point of killing its host: it is also extremely addictive and can take control of its victims' minds, forcing them to attack those that would seek to harm to it.

The Stuff also has a strange and very sweet taste that humans seem to enjoy - this made The Stuff especially dangerous as it was mistakenly sold as a foodstuff and even an ice cream by unwary businesses, resulting in the deadly substance being unleashed upon an unsuspecting public: with gruesome results.

The Stuff is the titular villain of the movie but the true antagonists are arguably Mr. Evans and Mr. Fletcher - two rival businessmen who were willing to sell the Stuff in order to profit of its addictive properties despite knowing of its deadly origins.

Several railroad workers discover a yogurt-like white alien substance bubbling out of the ground. It's found to be sweet and addictive. Later, the substance is marketed as "The Stuff," and it's being sold to the general public in containers like ice cream. It is marketed as having no calories and as being sweet, creamy, and filling. The Stuff quickly becomes a nationwide craze and drastically hurts the sales of ice cream.

Former FBI agent turned industrial saboteur David "Mo" Rutherford is hired by the leaders of the suffering ice cream industry, as well as junk food mogul Charles W. "Chocolate Chip Charlie" Hobbs, to find out exactly what The Stuff is and destroy it. His efforts reveal that the craze for the dessert is far deadlier and much more evil than anyone had believed: The Stuff is actually a living, parasitic, and possibly sentient organism that gradually takes over the brain—mutating those who eat it into bizarre zombie-like creatures, before consuming them from the inside and leaving them empty shells of their former selves.

A young boy named Jason also discovers The Stuff is alive and sees how it affects his family and how they are adamant towards his beliefs on The Stuff. He gets arrested for vandalizing a supermarket display of The Stuff, attracting the attention of Rutherford, who comes to his aid. Rutherford also manages to charm Nicole, an advertising executive who becomes his partner and lover when she sees the effect of The Stuff. The trio infiltrates the distribution operation, which is actually an organized corporate effort to spread The Stuff on the basis of eliminating world hunger, and destroy the lake of The Stuff with explosives. Meanwhile, United States Army Col. Malcolm Grommett Spears, a retired, right-wing soldier, leads a militia in battling the zombies and transmitting a civil defense message for Americans to break their addiction to The Stuff by destroying it with fire. The Stuff addiction is ended, and Rutherford, Nicole, Jason, and Col. Spears are hailed as national heroes.

Mo then visits the Stuff company's head, a man named Mr. Fletcher. He tells Mo that the destruction of the mine has not hurt his business, since the Stuff seeps out from many places in the ground, but Mo vows to find those places and gets rid of them all. Another man, Mr. Vickers, brings in Mr. Evans, the ice cream mogul with whom he is now working – and who had originally hired Mo to find out about what the Stuff was. They tell him they have come up with a new product that they call the Taste, which is a mix of 88% ice cream and 12% the Stuff, supposedly enough to make people crave more without it taking over their minds or killing them. However, Mo then brings in Jason, who is carrying a box, and then holds the two moguls at gunpoint. The box is full of pint containers of the Stuff, and Mo forces both to eat them all as punishment for all the lives lost to it, and for their greed. As they do, Rutherford asks pointedly, "are you eatin' it...or is it eatin' you?" When they finish, Mo and Jason leave them to the approaching police.

The film ends with smugglers selling the Stuff on the black market, having one of the smugglers tasting The Stuff and revealing that there is some products of The Stuff still around. In a post-credits scene, a woman in a bathroom says "Enough is never enough" while holding The Stuff. 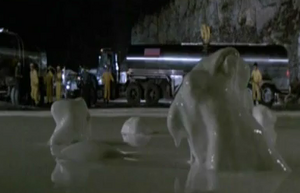 The Stuff oozing from the ground. 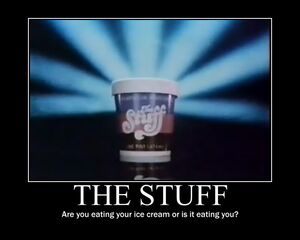 A Movivational Poster of The Stuff.
Add a photo to this gallery
Retrieved from "https://villains.fandom.com/wiki/Stuff?oldid=3433483"
Community content is available under CC-BY-SA unless otherwise noted.