One of Judge Doom's henchmen

Member of the Toon Patrol

Hitting his head with his weapon.

Destroy Toontown to make way for a freeway (failed).

Stupid is a supporting antagonist in Disney/Touchstone's 1988 hybrid film Who Framed Roger Rabbit. He is the dumbest one in the Toon Patrol.

He was voiced by Fred Newman.

Stupid is overweight, while all of the other Weasels are quite slim. Stupid wears a blue and white striped T-shirt, a red beanie with a propeller and white sneakers with untied laces. His weapon of choice is a baseball bat with a nail through it.

As his name implies, Stupid is so foolish that he is seen hitting himself over the head with his own weapon while laughing.

Stupid has only one speaking line in the film, when he excitedly informs Judge Doom that Toontown is on the other side of the wall in the Acme Factory, which he and Wheezy are drilling open. He is the first weasel to die after losing control of his laughter and his body is seen clutching a lily. The only time he specifically addresses Judge Doom is when he says that "Toontown's on the other side of the wall boss". 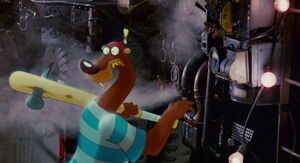 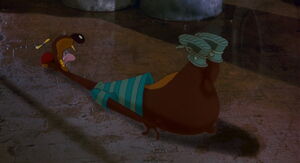 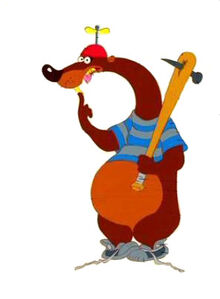