Villains Wiki
Register
Don't have an account?
Sign In
Advertisement
in: One Piece Villains, Female, Anime Villains,
and 20 more

Queen of the Pleasure District

Agent of the World Government

Empress of the Underworld

Stussy is a member of CP0 and an antagonist in the manga and anime series One Piece. She was an Emperor of the Underworld who served as a supporting antagonist in the Whole Cake Island Arc, the Levely Arc and Wano Country Arc.

She is voiced by Mami Kingetsu (who also voiced Charlotte Compote in the same series, Da Ji in Warriors Orochi, and Lady Alice in Tales of Symphonia: Dawn of the New World) in Japanese.

While attending the Levely, she wears a white dress with a pink necktie, white matching cape, gloves and dons fishnet stockings with fluffy rims and a garter belt.

Stussy appears to be a positive individual and disapproves of insults being casually thrown around. She is occasionally has a sensitive and possessive side which was shown when she shot down Du Feld, intending to have him blamed for her actions. However, she can get violent if any of her negative qualities are brought up.

At some point in the past, Stussy joined CP0 and was assigned an undercover role in the Emperors' Underworld, earning herself the title of Queen of the Pleasure District.

As part of her cover, Stussy was invited to Big Mom's Tea Party, where Charlotte Pudding and Sanji were to be married.

Stussy and the others arrived at Whole Cake Island, where she expressed disdain when Du Feld and Drug Peclo start insulting to everybody. Shortly after offering gits to the Linlin family, Luffy crashed the wedding and destroyed Big Mom's picture of Carmel, causing Big Mom to scream violently, immobilizing nearly everyone, including Stussy.

During the chaos, Du Feld attempted to steal the Tamatebako box, but Stussy stood in his way, interrogating him and later attacking him when he attempted to escape. An eavesdropping Morgans was persuaded by Stussy to confirm the official story as Du Feld attempting to steal the box for himself. But Du Feld's unconscious body rolled into the chest, causing it to roll off and, to both of their surprise, explode.

During the climax of the battle between the Charlotte Family and the Straw Hats and their allies, Morgans helped Stussy slip away from Whole Cake Island. Stussy was curious when Morgans cheered on Luffy, believing he was taking their side.

Stussy was present during the Levely in Mary Geoise alongside her fellow CP0 members, including Rob Lucci and Kaku. They were fullly prepared to fight for Saint Charloss when he attempted to make Princess Shirahoshi his slave, but backed down when another World Noble, Donquixote Mjosgard, beat Charloss and placed Shirahoshi and her family under his divine protection.

Stussy and her fellow CP0 members, with Rob Lucci and Kaku are joining in the World Government to take over at Wano Country would Kaido fell.

Stussy's concept art from the anime. 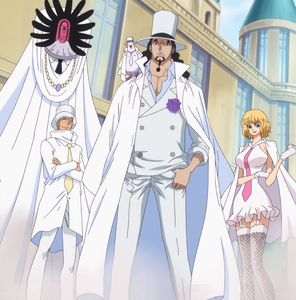 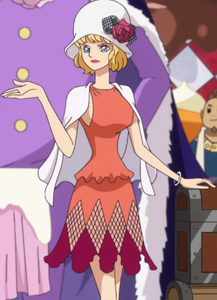 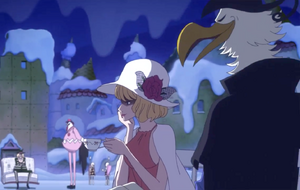 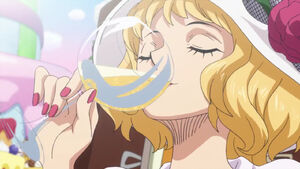 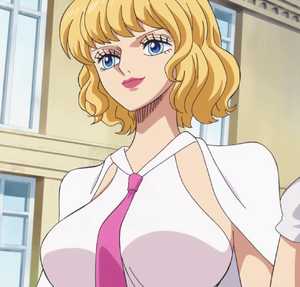 Stussy in the CP0. 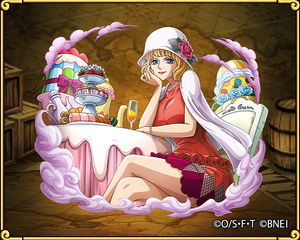 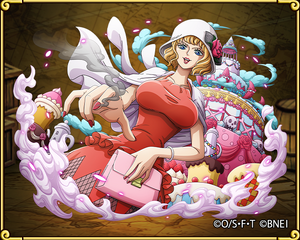 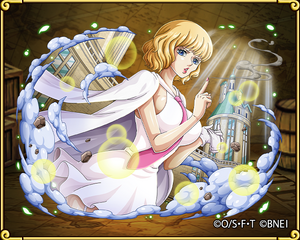 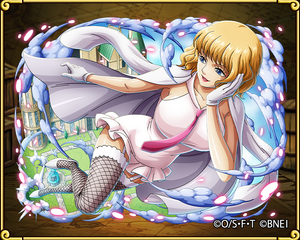 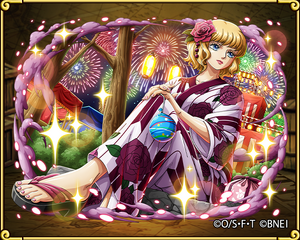 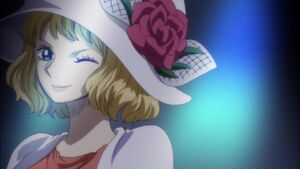