Villains Wiki
Register
Don't have an account?
Sign In
Advertisement
in: One Piece Villains, Pirates, Anime Villains,
and 25 more

Turning people into toys and commanding them

Sugar is a member of the Donquixote Pirates' Trebol Army, and is one of Doflamingo's most important members. Sugar ate the Hobby-Hobby Fruit, which allows her to turn people into toys. This Devil Fruit also stopped her aging process, making her an eternal child, so she is older than she looks. She is also the younger sister of Monet.

She was voiced by Rie Kugimiya in Japanese and Natalie Hoover (who also voiced Catarina Devon in the same series) in English.

Sugar appears to be a young girl, but is actually much older. This halt in aging is due to the effects of her Devil Fruit. During the takeover of Dressrosa, she wore a light-colored dress with a hood having bear-like ears.

While she is in the underground world, she wears a bright red hooded robe with bear-like ears and a small golden crown.

In the anime, she has aquamarine hair, a pink monocle with a purple covering, and a white dress with light blue polka dots and open-toed sandals.

Sugar is loyal to Donquixote Pirates. She is shown turning many citizens into toys and subjugating them into slavery.

She has a fondness for grapes, which are apparently her favorite food. She often eats them off her fingers. She is shown to be quite rude to Trébol, despite the latter being in charge of her protection. She also seems to be annoyed when people consider her weak to the point where she drops everything to show off her strength.

Sugar was first seen assisting the other Donquixote Pirates in turning many of the citizens into living toys. Sugar was seen sitting outside the Dressrosa palace. She ate candy as as Doflamingo talked to Vergo about the situation with Law.

She was seen watching in the Dressrosa palace ring, after Doflamingo's false resignation from the Shichibukai. Later that day, Baby 5 asked her where Doflamingo was, to which she responded that she did not know.

After the losers from the Corrida Colosseum tournament were imprisoned, she turned them into toys.

While Franky was attempting to breach the Toy House, Sugar heard the skirmish. Trebol assured that the Straw Hats' goal is the SMILE factory and can just turn them if they manage to reach that far. Trebol also told her with certainty that nobody knew about her. Sugar remained unaware that she is the target of Usopp, Robin, Thunder Soldier, and an army of dwarves. The dwarves attempted to poison her with the tobasco, but she easily defeated them all, then turned Robin to a toy. In Usopp's last-ditch attempt to defeat her, Trebol defeated and glued Usopp to the ground. Sugar proceeded to poison him with the tobasco, but when she did, Usopp formed a hideously grotesque face where his eyes popped out. Sugar was so frightened by this, she fainted in shock, and all of the toys turned back to normal.

Later, Sugar awakens and tries to turn Luffy into a toy, thereby erasing his entire existence, but thanks to Usopp's expertise sniping skills, Sugar was defeated again, saving Luffy. Later, Jora attempted to revive Sugar and a few of Doflamingo's other defeated sycophants only to be thwarted by Leo and Kabu, the former using the unconscious bodies of Sugar and the others as living weapons against Jora. In the end Sugar was arrested along with the rest of her "family" and the lot of them in every likelihood were sent to Impel Down. 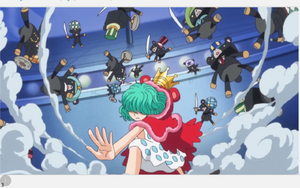 Sugar transformes some dwarves into toys 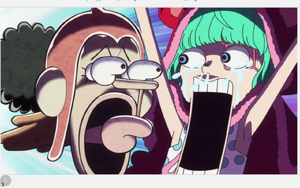