Capable of eating anything, powerful flatulence and singing (badly)

She was voiced by Rochelle Wilson.

In Hurl and Go Seek, Sugar is the only one that seems to be excited for the first part of the challenge - drinking a long-expired "juggy chug." She is the only one that appears to not mind its gross contents, and even sings the juggy chug theme song before downing her drink, earning her immunity as well as making her "it" for the next part of the challenge, which was a game of hide and seek. As she was waiting for the other contestants to hide, she drank all the remaining juggy chugs. After getting hit by Dave's shoe, she finds Dave and encourages him to show her Sky's hiding spot as well. After Max and Scarlett run into the group and they all begin to feel sick, the five of them search for Jasmine and Shawn. After finding them, Sugar leads the group while climbing up the tree both were hiding, and is kicked down by Shawn along with the others once they nearly get both.

In Pahk'd With Talent, the episode opens up with Sugar attempting to club Sky with a wooden stick, but after Sky wakes up, she disappears. Sugar reveals in the confessional that she wasn't actually going to hit Sky, and she just wanted to frighten her to throw her off her game for the challenge. During the hurdle race, Sugar collects all the hurdles instead of jumping over them due to her believing that that was the goal of the hurdle race, but finishes after Shawn and Sky. During the second challenge, Sugar was very far behind Sky and Shawn due to her climbing the tree slower and her believing that there was something such as a bus stop at the top of the tree. However, once she gets to the top and realizes there is nothing there, the tree starts to shake and she is flung straight to the finish line. In the final part of the challenge, Sugar's talent is "craptry," a mixture of country and rap, which did not go well with any of the judges. This caused Sugar to be eliminated, and after she was shot out of the cannon of shame, she yells "I'm coming wizard!"

In Lies, Cries and One Big Prize, Sky and Shawn seem disgusted when they see Sugar's picture before they choose their helpers in the challenge. 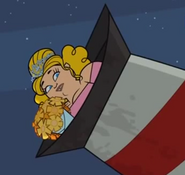 Retrieved from "https://villains.fandom.com/wiki/Sugar_(Total_Drama)?oldid=1482931"
Community content is available under CC-BY-SA unless otherwise noted.