Authority
Command of Shadows in the Metaverse
Shapeshifting

Gain Ann as a trophy partner and have sex with her.
Ensure Ren, Ryuji and Mishima's expulsions (all failed).

Suguru Kamoshida is the first major antagonist in the video game Persona 5 and the main antagonist of the first hiest, Castle of Lust. He is the very first heist faced by the Phantom Thieves, and represents the sin of Lust. His Palace resembles a Medieval castle, and it is based in Shujin Academy in the real world.

He is voiced by Yuji Mitsuya in the Japanese version (who voices Pica) and D.C. Douglas in the English version (who also voices Azrael, Albert Wesker and Yoshikage Kira).

Kamoshida is a former Olympic volleyball champion who later became the volleyball coach at Shujin Academy. During his time as a teacher, Kamoshida would use his fame as a means to give Shujin Academy high publicity. This also includes recognition for the school's students. If students put his name on college applications or were recommended by him for a scholarship, it would mean instant success. However, his ego became more inflated with the Principal clearly favoring him. As a result, he began to sabotage any other team that was about to surpass his volleyball team. One of which was the track team that included rising star, Ryuji Sakamato. Using his ways, Kamoshida got the old track team coach fired and began coaching with what was labeled as abuse. Eventually, he used the rumors of Ryuji's parents to provoke the track star into violence and broke his leg in a move of "self-defense." Thus causing the track team to disband. However, his volleyball team fared no better.

As Kamoshida coached the volleyball team, male members were put underneath extreme "training" that would leave them all bruised and beaten. Meanwhile, he even began physically and sexually abusing female students on his team. Despite the fact that students, staff, and even parents knew about this all happening, nobody could speak up since the principal would silence any attempts for the school to lose its star coach. With no way to stop Kamoshida, the Phantom Thieves of Hearts eventually plan a heist to steal his corrupt heart in Kamoshida's Palace.

Later on, it is revealed that Kamoshida was blackmailing Ann Takamaki to act as his girlfriend just to make sure her best friend, Shiho Suzui, could stay on the volleyball team. While Ann did play along with the charade, at one point Kamoshida demanded that Ann have sex with him, threatening to drop Shiho from the team if she refused. Despite wanting to keep Shiho on the volleyball team, this was one thing Ann couldn't bring herself to do, her encounter with the protagonist encouraging her decision. Enraged by her rejection, Kamoshida decides to take his frustartions out on Shiho in retaliation. After sexually assaulting Shiho (with the heavy implication that he raped her), she attempts suicide the very next day and it soon becomes part of the Phantom Thieves' mission to prevent further sexual abuse. In addition, it also becomes a mission to prevent the protagonist, Ryuji, and Yuuki Mishima's expulsion from school.

When Shadow Kamoshida is cornered, he transforms into Asmodeus, and his mutated form is a boss. Once defeated, the protagonist steal his heart and allows Ann to decide how to deal with him. Despite the now rewritten Kamoshida proposing to kill himself, Ann holds back and tells him to repent for his actions. Shadow Kamoshida can do nothing except comply with her words. Then the Thieves proceed to escape with Kamoshida's treasure which takes the form of a gaudy royal crown in the Metaverse, and his gold medal in the real world.

Kamoshida's influence lives on when the Phantom thieves visit the movie world as their memories of him combine with the movie world, Superman and another abusive teacher to create Kamoshidaman.

Kamoshida has long black unkempt hair and thick eyebrows. His jawline is broad and square. He wears a white sports T-shirt and black sports pants with double white stripes.

His Shadow Self wears a gold crown, red heart printed cape, and a pink underwear, leaving his torso and legs exposed. When he transforms into Asmodeus, he becomes a grotesquely fat pink demon with a thick purple tongue who wears his Treasure as a crown, and uses golden eating utensils to eat the Cognitive existences of his female team members to restore his health.

Kamoshida is described by Ryuji Sakamoto as a monster. He is a lustful, cruel, egotistical and an utterly selfish bully who abuses his volleyball team physically and emotionally. With female students, he abuses them sexually as well. Kamoshida is willing to sabotage any rival sports of his own school purely so his volleyball team rises to prominence. He believes his relative success as a coach and previous success as an athletic champion gives him the privilege to do whatever he wants and is so driven by his darker passions that he thinks of himself as a king on campus.

Meanwhile, Shadow Kamoshida is more dramatic and honest about the selfishness and egotism that drives his actions. He is also known to be a vicious gossip, regularly starting rumors to defame and hopefully expel students he dislikes. He has no respect for women or his students at all, viewing them as sex objects (female students) or as slaves to his glory (male students). He is also obsessed with Ann because of her blonde hair and being quarter American, which makes her a rarity in Japan. To him, having Ann as his "girlfriend" would mean that he could show her off as a trophy. Deep down, he is driven by the sense of inadequacy he feels after he faded into obscurity.

After the Phantom Thieves steal his heart and forcibly rewrite his personality to make him a good person, he loses his belief that he is the ruler of the school, Kamoshida and resigns and submits himself to arrest. Initially would rather commit suicide to avoid his shame instead of making things right.

Suguru Kamoshida in the manga adaption. 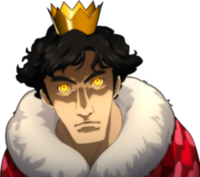 Kamoshida being aggressive in volleyball.

Shadow Kamoshida in the school. 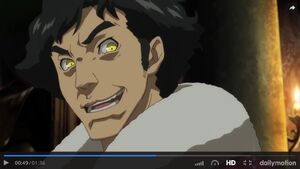 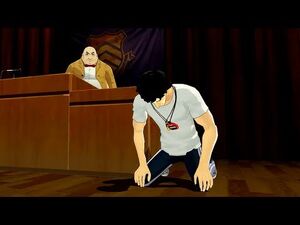 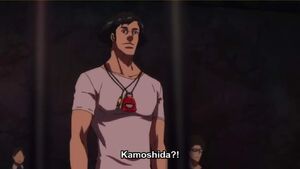 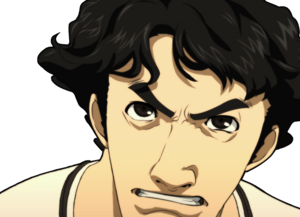 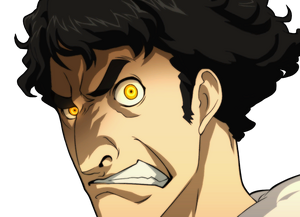 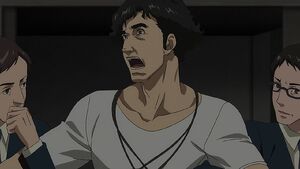 Retrieved from "https://villains.fandom.com/wiki/Suguru_Kamoshida?oldid=3886391"
Community content is available under CC-BY-SA unless otherwise noted.