Succeed with the terrorist attack on London (failed).

Sultan Mansoor is a major antagonist in the 2016 film London has Fallen.

He was portrayed by Mehdi Dehbi.

During a US drone strike which targeted Aamir Barkawi, both his legs were blown off. He later became part of Barkawi's attack team in London, remaining at its headquarters in an abandoned factory in the city.

During the attack on London, Sultan hacks into the city's power network, effectively shutting it down. He also blocks mobile communication. Later, he and Kamran try to communicate with Sultan's brother Raza Mansoor. However, Raza has been defeated by Mike Banning and President Asher who have taken the his walkie talkie. After a short conversation with Banning, Kamran and Sultan are both threatened by Mike before he kills Raza, broadcasting it to the two via the walkie.

During the hunt for President Asher, Sultan intercepts a message of Vice President Trumbull to Asher. Deducing Asher's location, Sultan sends a team of henchmen there but they are all killed by Banning and Asher.

The terrorists eventually get hold of Asher and bring him to their headquarters. When Banning and a task force team attack to save Asher they destroy the power generator, rendering Sultan's tech useless. Sultan tells Kamran to execute Asher now as the task force is almost there but Kamran claims that they need the power back first because Asher's death is to be broadcasted. Sultan manages to get them back online but while they manage to broadcast, Mike enters the room before Kamran can execute Asher. Mike swiftly shoots the terrorists present, including Mansoor who is shot three times the chest. While Mike fights Kamran, the dying Sultan draws a grenade and throws it in front of the combatants. While the grenade explodes, Mike and Asher survive. Sultan dies in the explosion and Kamran flees from the building. 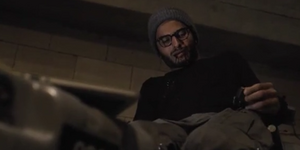