Singing to the Park workers much to their annoyance.

The Summertime Song is the main antagonist in the Regular Show episode "This is my Jam". It also appears in the episode "Exit 9B".

It was voiced by Sean Szeles.

Mordecai and Rigby discover an old tape while cleaning the top of the park house from the roof titled "Summertime Loving, Loving in the Summertime" by a fictional band known as "Solid Bold". Later on, they listen to the song for nostalgia sake. But then it gets stuck in Rigby's head. After the song starts to possess Rigby and takes over his mind, Mordecai gets freaked out and approaches Skips in order to solve the problem. Skips claims that some sleep would solve the problem. When Rigby was asleep and started dreaming, The Summertime Song was released. When Rigby woke up, the Summertime Song converted into a physical form and appeared in Rigby's room, dancing and playing the song.

After it emerged from Rigby's head, it started to interfere with everyone else in the park. In order to fight back against the Summertime Song, Mordecai asks Rigby for a list of things that he likes and converts them into a song, therefore creating the "Aww Snap" song. The park crew then approach the Summertime song and perform the song. However, the Summertime Song is not defeated until Benson arrives. Benson brings out his drums and helps the crew perform the Aww Snap song thus finally leading to the Summertime Song's destruction. The Summertime Song makes its return in Exit 9B as one of the many revived villains thanks to Garrett Bobby Ferguson Jr. but is easily destroyed by Mordecai after being whacked by his baseball bat. 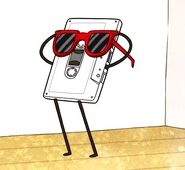