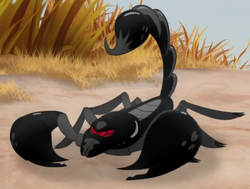 Sumu is a minor, but deadly antagonist of Disney's The Lion Guard. He is a Tanzanian red clawed scorpion and a member of Scar's Army who was sent by the ghost of Scar to assassinate Simba.

He is voiced by Ford Riley.

At some point, Scar recruited Sumu part of his plan to eliminate both Simba and the Lion Guard in the same day. First he has the scorpion sting Simba as they celebrated his defeat over Scar. In order to save his life, the Lion Guard must retrieve must retrieve the only known cure for scorpion venom: volcanic ash, which the nearest source is the volcano in the Outlands. This allowed Scar to set up an ambush for the guard with his minions so that they can destroy them all at once on their home turf. Alas, the plan failed when the Lion Guard escaped and managed to cure Simba.

Retrieved from "https://villains.fandom.com/wiki/Sumu?oldid=2856240"
Community content is available under CC-BY-SA unless otherwise noted.