Ability to fly.
Spear-like weapon that can emit a laser beam when charged.
Command over some of the Geonosian military.

Carry out the Archduke's will by any means necessary (partially successful, then failed).

Escape Geonosis and avoid getting killed by Delta Squad (failed).

Sun Fac is a minor antagonist in the Star Wars franchise but is a major antagonist in Star Wars: Republic Commando. Sun Fac is also a playable character in the 2015 videogame Star Wars: Galaxy of Heroes. He is a Geonosian who serves as Archduke Poggle the Lesser's chief lieutenant and enforces his will. Sun Fac would be the one to sentence Anakin Skywalker (who would later become Darth Vader) and Padmé Amidala to death in the Geonosian execution arena on accounts of espionage (although they would escape when the Grand Army of the Republic invaded Geonosis). He would later meet his demise when his ship gets blown up by Delta Squad as he failed trying to escape them.

Sun Fac was a Geonosian and would eventually become chief lieutenant serving under Archduke Poggle the Lesser. He was extremely ruthless managing the Geonosian lower-caste workers like almost all the other Geonosian aristocrats. Sun Fac would force the workers to work in very harsh conditions no matter how dangerous it appeared to be. He would always carry out the Archduke's will without question and was unusually intelligent and creative among Geonosian standards.

Before the First Battle of Geonosis, Sun Fac would be the one to convict Anakin Skywalker and Padmé Amidala (who were trying to rescue Obi-Wan Kenobi on Geonosis) on charges of espionage. He would sentence them to death in the Geonosian execution arena. After the Grand Army of the Republic invaded Geonosis, would try to escape the planet rather than stay and hide alongside the Archduke and the rest of the high ranking Geonosian members. This would be his downfall however, as he was trying to get to his starfighter he was being pursued by clone commandos known as Delta Squad. When he entered his ship and tried to take off, it was damaged by one of the commandos, RC-1207 who used the DC-17m Interchangeable Weapon System sniper attachment. Sun Fac then died as his ship crashed.

Sun Fac appears as a playable character in the Star Wars: Galaxy of Heroes 2015 video game. 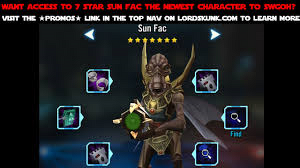 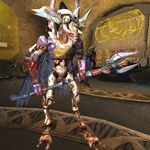 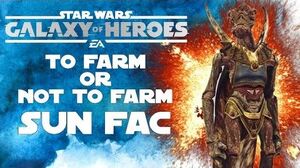 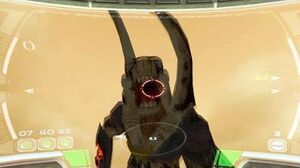