Leader of the Shiki

Mastermind of the Sotoba takeover

Talking with Seishin.
Dressing up in Gothic lolita clothing.

Turn Sotoba into a haven for Shiki.

Escape Sotoba with her life.

Sunako Kirishiki is the main antagonist of the anime, manga, and novel series Shiki. She is the mastermind behind the Shiki's arrival in Sotoba, having been drawn in by the work of her favorite author Seishin Muroi (a native of the village, who wrote about it in his works). Sunako sees the village as the perfect place for her and her followers to settle down in, and create a haven where the Shiki do not have to hide.

She was voiced by Aoi Yūuki in the Japanese version, and by Cherami Leigh in the English version.

Sunako is a mysterious young girl who seems to be quite childlike and playful when first introduced. She enjoys reading books as she read many of them when she was confined by her family and how she enjoyed reading Seishin's books. She, however, displays knowledge that a child her age shouldn't have and exhibits some levels of religious affiliation, especially about the topic of death, something which hinted Seishin of her true nature.

In truth, she is the leader of the Shikis, and as the leader, she is more mature and understanding, as she was a mother-figure to Chizuru since she is actually more mature than the latter and when she told Tohru her story when he was suffering from the guilt for killing Natsuno.

Despite everything that she had done, she is one of the Shikis who does not kill out of malice but survival and honestly wanted to create a safe place for the Shikis, so that they would no longer need to hide and be accepted. She also cares for her fellow Shikis, her adopted family and Seishin as she shows a level of concern for them, such as she mourned Chizuru's death and was worried about Seishirou when he didn't come back and feared that if she fell asleep, it would be the last time she would see Tatsumi and Seishin. Overall, she was just a lonely girl who only wanted to be accepted by people.

Sunako has the appearance of a young girl with dark purple hair, pale skin and hollow black eyes like Chizuru. She mostly wears different kinds of Lolita fashion with accessories. When she was first introduced, she wore a lavender dress with black laces and red Mary-Jane like shoes. When she was alive, her eyes were brown.

A 13-year-old girl who moves into the Kanemasa mansion atop the hill with her family. She has a rare genetic disorder known as SLE, which leads her to stay inside her home during the day and only come out at night. She and her family are fans of the essays and novels written by Seishin Muroi, and is the reason they moved to Sotoba. Sunako dislikes people calling her name with the honorific "chan" or "miss" in the English dub.

Sunako was originally a beloved daughter of a well-off family. One day, a Jinrou Western noble visited her family and took interest in Sunako. She was bitten by him and died shortly afterward.

When she revived as a Shiki, her family kept her confined and sent her servants to feed on. After some time, she finally left her refuge and went on a journey to find her family, who had moved. However, her journey went on to no avail for so long that by the time Sunako realized it, her entire family was all dead.

Later she met the Kirishiki family and was adopted by them. Sunako established a group of loyal followers who became servants of her and the Kirishiki. After reading the works of Muroi Seishin she became interested in his village. Sunako convinced her family to move to Sotoba where she began having the Shiki feed on the residents and turn them. While she was there she finally met Seishin and the two began having discussions at night together. They became good friends and related to each other since they both felt forsaken by God. Muroi catches on to her true nature though when helping Toshio Ozaki investigate the deaths and confronts her about it.

Sunako denies it and almost gives into her desire to bite Muroi. After this event, Seishin begins to question Ozaki who shortly after murders his own wife to gain knowledge on destroying the Shiki. After Seishin's father joins the Shiki Seishin finally decides to join them. His bond with Sunako seems to be a major factor in his decision and as soon as he joins he lets Sunako bite him. Later Tatsumi informs her that Chizuru was killed and about the villagers' plot to eradicate the Shiki. Sunako responds by ordering him to start an all-out war with the humans of the village.

The humans fight extremely hard and eliminate most of the Shiki and end up surrounding the mansion where Sunako lives. Seishin comforts her and Tatsumi decides to lure the villagers away so they can escape. After Tatsumi lures the villagers away Seishin drives off with Sunako (who is hidden in a suitcase and fast asleep). On the trip out of the city Seishin accidentally bumps into Ozaki's vehicle and is seen by him and the hunters with him. Tomio Ookawa and a few of the hunters decide to go hunt Seishin down. During the chase Seishin manages to protect Sunako but is fatally stabbed and hides her suitcase while he bleeds to death. Sunako awakens to find Seishin's body and is seen by Ookawa. Sunako manages to evade him and make it to a church. Tomio finds her though and corners her. Sunako tries to fight back but Ookawa beats her and gives a speech trying to disgrace her before she dies. Before he can stake her though Seishin shows up (now resurrected as a Jinrou) and kills Ookawa, saving Sunako. As the church burns due to an immense fire caused elsewhere Sunako talks about letting herself die, but Seishin convinces her to live.

In the end, she escapes the village with Seishin. In the manga, several months later, Sunako and Seishin were last seen in Tokyo. 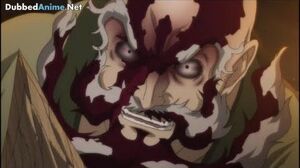