Transform the Zenkaiger's dimension into a world of sundials.

He is voiced by Kōsuke Toriumi who previously voiced an Assaulter Borg, Vannain, a Rhino Doubler, Debo Kokodoko and a Mannequin Jamen.

The Sundial World made his first appearance right after Secchan has done a recap of the previous event as he was battling against the Zenkaigers where he used his Tokiwomodo Sword Z and opened fire at the team. However during the skirmish Secchan tries to warn the team that this robot isn't High Noon World, but before he could explain the Sundial World used this ability as he reverse the time to the point where he easily captured the robotic bird after he used his time traveling ability and sent the team and himself to the very first episode of Zenkaigers and here's a catch if they don't defeat the Sundial World anytime soon they'll have a time paradox on their hands.

During the first invasion of Tojitendo the Sundial World was holding onto Secchan as we proclaimed to his captive that once Kaito has succumbed to the flow of time the Zenkaigers will be no more as demonstrated when Kaito forgotten who Juran was when he arrived in the first episode. A while later in the first episode Sundial World leaves Secchan chained to a bench as he tries to talk to Barashitara into joining him to defeat the Zenkaigers, but since he was in the past the robotic commander barely even recognized the Sundial World as a World monster and the result of it he got punch in the chest.

A while later during the debut of Boxing World and the Great Boxing World the bandaged Sundial World met up with Ijirude and tries to ask him to join up and take out the Zenkaigers, but once again he was in the past as he got electrocuted by the Ijirude's Ijikku Hand. As this goes on the injured Sundial World used a stick as a walking stick as he limps on when he laments that his bosses won't even listen to him especially if he was in the past until he spots Stacey as he then recalls the first fight Stacey that fought was against a pirate. He tries to warn Stacey about the pirate, but once again he was in the past as the Sundial World got gunned down (and if anyone ask this was the debut of the Door World and the Great Door World). A while later during the debut of the Kabutomushi World and the Great Kabutomushi World he used the Tokiwomodo Sword Z and froze Flint in time just to prevent her from creating the Zenkaiju Gear and he was about to eliminate her until the past Secchan spots him and his present self and the duo began pecking him.

Now since we're back to the present he used this ability and he healed himself as he thanked Secchan for telling about Kaito's parents as he was about to travel back in time to the point where Kaito was a kid he was then interrupted by the present day team as they shot the Sundial World in the back. However they kept on firing him so as soon as they let their guard down he'll go back in time, but surprisingly they tricked him and it was all thanks to Secchan who told about this world while being chained to him. So with that the real battle was on as they began attacking him now during the fight they used Sentai Gear #16 as they performed this finisher which is Babel Attack thus freeing the Hidokeitopia from the Tojiru Gear. 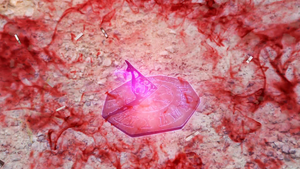