Throughout the first film, Sunset Shimmer is shown to be mean, short-tempered, greedy, bratty, egotistical, cruel, condescending, manipulative, and dishonest. She frequently insults and belittles others, and thinks little of it. According to human Fluttershy, Sunset makes life miserable for "anyone who stands in her way". As a result, much of the Canterlot High student body is afraid of her. She is also shown to be mainly concerned with gaining power, desperately trying various attempts to get Twilight's crown in order to use its magic.

However, she doesn't appear to be willing enough to inflict physical pain on others, or at least not upon small animals (i.e. Spike), claiming she isn't a monster. She appears to be easily irritated when someone else is praised in her presence, to the point of being provoked into attacking them.

When Sunset puts on the element of magic, she transforms into a demonic visage of herself. While in this form, she becomes more fierce and goes so far as attempting to dispose of Twilight. After she is defeated by the Elements of Harmony, Sunset Shimmer becomes immediately repentant and apologizes for her actions, appearing to renounce her prior dishonest and unkind ways.

In the second film, Sunset Shimmer appears to have completely changed from her old self and started believing in friendship, becoming friends with her former enemies, even Twilight, and friendly toward others. She also appears deeply repentant for her actions made at the end of the first film, referring to her altered self as a "raging she-demon". By the end of Rainbow Rocks, Sunset starts writing friendship reports to Princess Twilight using the book she once used to communicate with Princess Celestia.

Sunset's backstory is explored deeper in the comics. Here, it is shown she had a very troubled relationship with her mentor Princess Celestia, which explains her descent into evil (though she was already extremely arrogant, self-centered, and antisocial, thus her mentor's short patience with her). Sunset had previously appeared in the form of a toy and as a NPC in the MLP Gameloft game. In both versions, she was merely a neutral character and not a truly evil one.

Sunset Shimmer first appears as the main antagonist in the first film. She is an unicorn pony who steals Twilight Sparkle's element of harmony: her magic crown, and in a tussle with Twilight Sparkle, the crown is thrown into a mirror that acts as a portal to another world, which Sunset goes through to retrieve the crown. In this other world, she is depicted as a human who acts very disrespectful and mean to Twilight Spakle when they first encounter each other. In the past, she drove the human counterparts of Rainbow Dash, Fluttershy, Applejack, Pinkie Pie, and Rarity apart, but Twilight reunites them. She uses underhanded tactics to humiliate Twilight Sparkle and keep her from becoming Princess of the Fall Formal, but Twilight Sparkle still easily beats her in the competition.

However, She steals the crown from Twilight Sparkle, puts it on, and transforms into a demonic-looking winged humanoid. In this form, She becomes purely evil. With her new powers, she plans to use them and her army of mind-controlled teenagers to conquer Equestria. She tried to kill Twilight, but Twilight and her friends use the power of the Elements of Harmony to return her to human form. She is reduced to tears and apologizes for everything that she has done and Twilight believes her friends can help teach her the magic of friendship.

Afterwards, the human counterpart of Princess Luna, Vice Principal Luna, hands her a masonry trowel to repair all the damage that she caused.

Sunset Shimmer re-appears as one of the main protagonists in My Little Pony Equestria Girls: Rainbow Rocks, and was reformed from her villainous ways in the first film. With the exception of the Rainbooms, the rest of Canterlot High bears resentment toward her and she even resents herself for the actions she'd taken as what she refers to as a "raging she-demon". She even admits to herself and her friends that she only dated Flash Sentry to make herself more popular.

When Sunset gives the The Dazzlings a tour of the school, she gets a bad vibe from them, when Adagio Dazzle gets defensive about her pendant. Her suspicions are later confirmed when the Dazzlings mesmerize the students and faculty when they are singing. Using a magical book with her cutie mark on the cover, Sunset sends an SOS to Twilight Sparkle in Equestria. During Twilight's role as the Rainbooms' lead singer, Sunset acts in a supportive role and keeps an eye on the competition, especially the Dazzlings during the Battle of the Bands. At one point, Sunset Shiimer confronts the Dazzlings, who try to manipulate her insecurities by pointing out that the Rainbooms were reluctant to allow Sunset Shimmer into the band.

When the Rainbooms lash out at each other during the final round of the Battle of the Bands, Sunset realizes the Dazzlings' true intentions and is able to stop the arguing. She even accepts partial blame due to her lack of knowledge in friendship.

When the Dazzlings overpower the Rainbooms during the film's climax, Sunset Shimmer steps up and sings on the band's behalf. Her help not only gives the Rainbooms the strength needed to defeat the Dazzlings, but she also undergoes a half-pony transformation like her friends. Afterward, Sunset Shimmer joins the band as a singer and guitarist, and she uses her old journal that she communicated with Princess Celestia through to write her friendship reports to Twilight Sparkle.

During the credits, Sunset is seen having now been accepted by the rest of the school, as the Cutie Mark Crusaders walk happily with her and Bulk Biceps helps her get Angel down from where he is stuck.

Sunset Shimmer is featured in the songs Welcome to the Show and Shine Like Rainbows during the film.

Throughout most of the film, Sunset Shimmer is in human form and devoid of magic, relying on manipulation and bullying to get her way. Her abilities as a unicorn are never demonstrated, but since she was Princess Celestia's personal student, it can be assumed they would be approximately on the same level as Twilight Sparkle's (before the latter became a Princess). Because of her Cutie Mark and her color scheme, it can be theorized she has an affinity to fire magic.

When Sunset Shimmer uses the Element of Magic. She turns into a powerful, winged demonic entity with a fiery look. In this form she displays immense magical powers, despite being in a magicless world. She is proficient with both Dark and Fire spells. She is able to effortlessly destroy walls and arguably so than, turn associates into a demon, brainwash large groups of people at once, and conjure powerful fireballs. Her only weakness in this form is that the Element is not "loyal" to her, since she does not grasp the magic of Friendship. When she tried to kill Twilight Sparkle and her friends rush to her rescue, the magic of the Element refuses to harm them, instead deserting Sunset Shimmer and imbuing the friends with power, despite Sunset Shimmer still wearing the crown. 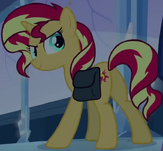 Sunset as a Demon

Sunset Shimmer during the events prior to the Equestria Girls movie

Sunset Shimmer along with her simple-minded minions Snips and Snails

Sunset Shimmer apologizing for what she has done

Sunset Shimmer in a cloak

Sunset Shimmer imagining herself as an Alicorn in the mirror
Add a photo to this gallery
Retrieved from "https://villains.fandom.com/wiki/Sunset_Shimmer?oldid=945136"
Community content is available under CC-BY-SA unless otherwise noted.