Get Akane to breakup with Seiji (failed).

Vengeful Parent
Suo Hiyama is the main antagonist turned anti-heroine in episode 7 and 8 of Love Tyrant. She is the head of the Hiyama Clan, one of the wives of Kanzou, the biological mother of Akane Hiyama, the stepmother of Yuzu Kichougasaki and the aunt of Shikimi Shiramine.

Suo is a fair-skinned young woman with dark red hair that is held with a red ribbon, dark red eyes and red lipstick.

She wears a kimono hued with dark reddish-brown and white designed with yellow petals at the bottom. There is tied with a dark and bright yellow obi with a red rope on her waist.

Suo is shown to be a stoic and stern woman, but she feels hurt from the fact her husband left her deep down.

Suo was revealed by Guri that she deeply cares for her daughter and wants to protect her from getting hurt from falling in love with someone. She and Ameisha and their families are rivals to the core.

Suo does not care about true love anymore from her experience with Ameisha Kichougasaki and her husband in the past. It was revealed that she's not in friendly terms with Ameisha because they both fell in love with the same man who later became Akane and Yuzu's father. She gave up her love for her husband and chose her family over him, but got upset when he moved on.

Suo, who believes love leads to weakness, orders Akane to break up with Seiji. Seiji is attacked by assassins but Aqua saves him. Seemingly imprisoned Akane recalls her childhood, the first time she met Seiji and how she eventually fell in love with him. Shikimi tells Seiji the assassins work for Akane’s mother and she has locked Akane up in the family home as punishment for falling in love. Following Shikimi’s urging Seiji, Aqua, Yuzu and Guri decide to help rescue Akane.

At the Akane household Akane tries to get Seiji, Guri and Yuzu to leave before fighting with Guri who threatens to steal Seiji unless Akane stops her. Akane’s mother, Suo, appears while Shikimi captures Seiji. Suo orders Akane to kill Seiji. Akane almost does so but cannot as she loves Seiji too much. Suo almost beheads Seiji herself but Akane saves him. Before Akane can fight Suo, Yuzu’s mother, Ameisha, arrives and duels Suo instead. Akane and Yuzu explain their mothers were once in a relationship with the same man, Akane and Yuzu’s father, and were good friends, but the relationship ended badly, resulting in their family feud. Akane stops the fight by insisting she is staying with Seiji no matter what. Guri points out Suo is acting out of love and is subsequently stabbed in the head by the embarrassed Suo, who allows Akane to continue dating Seiji, on condition she will kill him if he ever hurts Akane. Akane, back to her old self, attacks Guri for kissing Seiji and declares that they are now rivals. Suo explains to Ameisha that Yuzu is in love with Akane while also dating Seiji, something Ameisha had been unaware of. 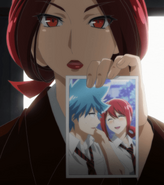 Add a photo to this gallery
Retrieved from "https://villains.fandom.com/wiki/Suo_Hiyama?oldid=3858225"
Community content is available under CC-BY-SA unless otherwise noted.