Servant of the Skrull Empire

Fighting the enemies of the Skrulls.

Aid the Skrull Empire against threats (all failed).

Bio-Engineered Alien
Super-Skrull (real name: Kl’rt) is a Skrull warrior that was given the powers of the Fantastic Four and a villain from the Marvel comics.

Empowerment and First Fight with the FF

After the Skrull tried to invade Earth only to be driven back by the Fantastic Four, the Skrull emperor, Dorrek, began working to create a super powered warrior for the empire. Kl’rt was chosen as the subject for the experiment, due to being a very well-noted soldier of the Skrull. He was bionically enhanced so that he had all of the Fantastic Four’s powers and after being empowered by an interstellar beam, Kl’rt’s powers were even stronger. Super-Skrull managed to easily overwhelm the Fantastic Four in their first battle, but Mr. Fantastic figured out how his abilities were being increased. Thus he created a jamming device to take away Super-Skrull’s powers, allowing them to defeat him.

However the Skrulls realized what was going on and created a stronger interstellar beam that they used on Super-Skrull. With his powers restored, he took the form of Dr. Franklin Storm and attacked the Fantastic Four. Super-Skrull claimed he had received his powers in the Skrulls’ prison laboratory, though Mr. Fantastic found out who he really was. He threatened to launch an atomic attack on the Skrull home planet, prompting them to recall Super-Skrull, as well as send Dr. Storm back. However the Skrull had placed an explosive on him to try and wipe out the Fantastic Four, but Storm threw himself to the floor, sacrificing himself to protect them. Super-Skrull was later among the many villains sent by Doctor Doom to attack Mr. Fantastic and the Invisible Girl’s wedding, but was stopped.

Later, Super-Skrull’s repeated losses caused him to fall out of favor with his race. He was given one last chance to prove himself by fighting Thor, but when he lost again, he was exiled from the Skrull homeworld.

However Super-Skrull was still loyal to his race and his great power caused him to be called into service numerous times. On one occasion, emperor Dorrek ordered Super-Skrull to kill Captain Marvel, so as to disrupt the Krees’ surveillance of Earth. However the captain turned his powers against him. At another point, Super-Skrull took part in the war between the Skrull and the Kree. He took on the Avengers and used the war to increase his standing amongst his kind, but he was sent into exile for treason. Super-Skrull eventually ended up as a servant of Thanos and had another encounter with Captain Marvel. He was defeated, ending up on Earth without any means of getting off of the planet.

Seeking to find a way to power a starship, Super-Skrull attempted to steal the Cavourite crystal and battled against Ms. Marvel and Spider-Man. He managed to defeat them, but when he obtained the crystal, its energies caused the beam that powered its abilities to teleport him to the Skull homeworld, stripped of his physical form. Eventually the planet was destroyed by Galactus, causing Super-Skrull to end up trapped in the Van Allen Belt. However the instruments of a group of scientists, including the superhero, Sasquatch, caused Super-Skrull to reform.

But he found that he was dying due to developing a form of leukemia because of his time trapped in the belt. Sasquatch took on Super-Skrull, eventually stripping him of a physical body again. While Super-Skrull was away, the Skrulls had lost their shape-shifting abilities and their empire had been reduced to various factions. S’Byll, a self-proclaimed empress of one of the remaining factions, manipulated the Silver Surfer into using his powers to recreate Super-Skrull so that he could aid her in fighting the Badoon. This almost resulted in another Kree-Skrull war and Super-Skrull convinced the Silver Surfer to use his powers to help him re-activate the dormant shape-shifting abilities in S’Byll’s genes. Not only that, she was also granted the power to restore that power in other Skrulls. S’Byll was sure that this would allow her to gain support and let the Skrulls to resist the Kree’s genocidal movement against them. Super-Skrull continued to fight as S’Byll’s champion, now known amongst the Skrull as their hero. Later, the Stranger tried to add S’Byll to his collection, but the space pirate, Captain Reptyl, showed up and exchanged his pirate crew for her. He asked to become a privateer in her cause and S’Byll agreed, prompting Super-Skrull to angrily fight him for the honor of being S’Byll’s right hand and general. However he was defeated and left to drift lost in space, ending up back on Earth, where he decided to hide until he could receive orders from a true successor to emperor Dorrek.

Eventually Super-Skrull took on the form of Iron Fist, allowing him to use the Rand Corporation to gain control of the Savage Land. This brought the company into conflict with Oracle Inc., which was owned by Prince Namor. Namor, Nomrita, and Misty Knight faced off against Super-Skurll, who managed to bring an end to his plans. He eventually took on a new identity as Lon Zelig, a master of disguise that quickly became well known in Hollywood. However Super-Skrull found himself targeted by other Skrulls, who believed him to be a living representative of the old empire and a potential menace. They tricked the Human Torch into helping them, but Super-Skrull managed to fend them off and revealed what was going on, before disappearing.

Super-Skrull eventually joined a Skrull faction that served the Intelligentsia, a version of the Kree’s Supreme Intelligence. Though he disliked serving her, he did follow her command to kill a girl named Kelly, who had a connection to the nexus of all realities. Captain Marvel fought Super-Skrull, but he managed to kidnap Kelly and returned to Intelligentsia with her instead of killing her, hoping to use her to take control. Super-Skrull fought Capain Marvel again, but Kelly used her powers on herself, negating them, and putting an end to his plan. Super-Skrull left Intelligentsia’s service and by that time, S’byll had died after her throneworld was destroyed by the Devos.

Super-Skrull thus joined a faction seeking a successor to Emperor Dorrek and decided that Hulkling was that successor. He was the son of the original Captain Marvel and Princess Anelle after Marvel’s capture by Super-Skrull many years before. Despite the Young Avengers attempts to intervene, Super-Skrull told Hulkling about his parents, before killing a female Skrull sent by Princess Anelle to raise him. The Kree and Skrull began fighting over him, but Super-Skrull used his shapeshifting abilities to impersonate Hulkling, saying he would spend a year in each empire then make a decision. However the Skrull empire fell to the Annihilation Wave soon afterwards and even Super-Skrull couldn’t stop it. He joined forces with an engineer named R’Kin to find a way to stop the Annihilation Wave’s weapon, the Harvester of Sorrows, particularly because Super-Skrull believed his son, Sarnogg, was on a planet in the path of the wave. Thus he went with R’Kin after the Annihilation Wave’s source, the Negative Zone, and rallied soldiers form a penal colony inside.

However Super-Skrull was betrayed and imprisoned by R’Kin, who blamed him for the death of his father, but he used his hypnosis power to make the engineer free him and another prisoner, a robot named Praxagora. Super-Skrull told her to get away, though he absorbed enough of her energy to make a last stand and sacrificed himself to destroy the Harvester of Sorrows. Now an even greater hero to his people, Super-Skrull’s body was preserved and eventually he was brought back by Firelord, Ronan, and Ravenous. Some time later, Super-Skrull teamed up with Praxagora and Ronan and headed to the homeworld of House Fivero, the current leader of the Kree Empire. Together, they freed the Kree of Fivero before Super-Skrull disappeared with Praxagora, but reappeared later to help Ronan fight the Phalanx who had taken over the Kree homeworld. In their battle, Ultron, who’d taken leadership of the Phalanx, managed to take over Praxagora and made her self-destruct with Super-Skrull just barely shielding his allies. They eventually managed to defeat the Phalanx.

Later, Super-Skrull showed up during an invasion of the homeplanet of Nova, an ally of his during the events of the Annihilation Wave, by Skrulls who were similarly bio engineered to him so that they could mimic the powers of other individuals. Super-Skrull helped Nova drive them away and they headed to Earth to fight the Skrull invasion there. But Super-Skrull declared his loyalty to the Skrull empire and started fighting Nova.

However he revealed this to be a lie when he helped the hero get back to his home planet and avoid detection by the Skrull fleet. But Super-Skrull then went after his daughter, Jazinda, and fought She-Hulk, succeeding in defeating them, though he couldn’t bring himself to kill his daughter and left.

Super-Skrull ended up one of the warlords struggling to take control of what remained of the Skrull Empire. He quickly became one of the most powerful, but the Builders began invading, taking control of several space empires. The Skrull remnants united against their common enemy and chose Super-Skrull to attend a war council between various glactic powers uniting to fight the Builders. He would take leadership of the Skrull forces as the alliance fought the Builders. At first, the alliance was losing until they managed to win a series of key victories that drove the Builders back from whence they came. Super-Skrull, wanting to thank the Avengers for their help in the conflict and also after more glory, joined the alliance in liberating Earth from Thanos. They suceeded, killing Black Dwarf, one of Thanos lieutenants, and afterwards, Super-Skrull was named emperor of the reformed Skrull empire.

Super-Skrull has the ability to shape shift into anything he chooses, a power he shares with other Skrulls. Due to the bionic engineering he underwent, he has numerous receptors planted in his body that gather the cosmic energy that gave the Fantastic Four their powers. Thus Super-Skrull can mimic their powers, which consist of superhuman strength, endurance, and durability as well as the ability to turn parts of his body into a rock-like substance, the ability to turn himself and other objects invisible and generate psionic forcefields, the power to make his body extremely malleable and stretch himself to great lengths, and the ability to envelop his body in fiery plasma, unleash blasts of fire, absorb heat, and fly. Super-Skrull can also use combinations of these powers and at first his powers were dependent on his access to cosmic energy, making their strength vary depending on his location. However his powers were enhanced so that Super-Skrull’s powers are at a set level, where they are actually stronger than the Fantastic Four and he can use his powers for an hour before he starts to feel tired. Super-Skrull also possesses a hypnotic gaze and his training as a soldier makes him a skilled hand-to-hand fighter and marksman, as well as able to fly starships. 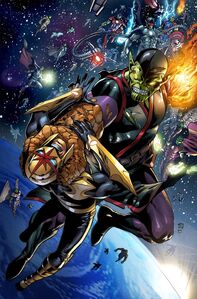 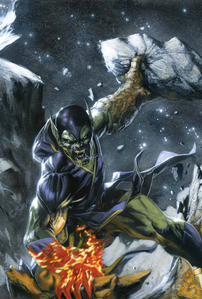 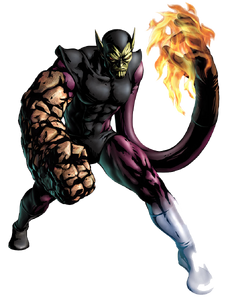 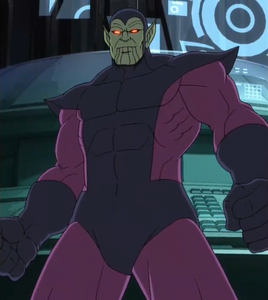 Super-Skrull in Hulk and the Agents of S.M.A.S.H. 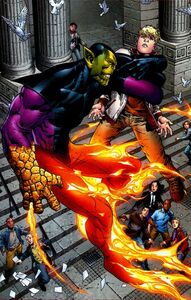 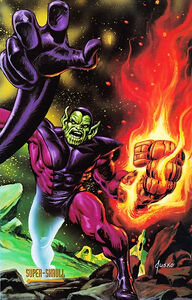 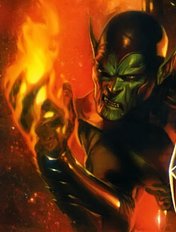 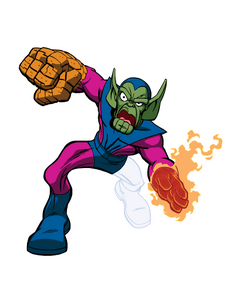 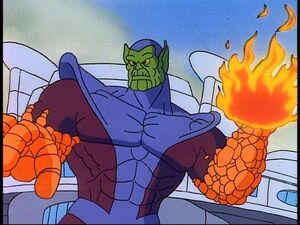 Super-Skrull in Fantastic Four: World's Greatest Heroes
Add a photo to this gallery 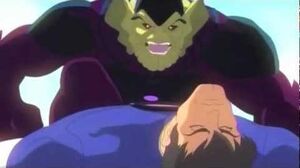 Retrieved from "https://villains.fandom.com/wiki/Super-Skrull?oldid=3418912"
Community content is available under CC-BY-SA unless otherwise noted.