South Park: The Return of Chef

Have a good understanding of modern technology
Brainwashing

The Super Adventure Club ("S.A.C." for short) is a group of exploitative pedophiles who travel the world to molest native children in various third-world countries. They first appeared in as the main antagonists of the South Park episode "The Return of Chef".

At the start of the episode it is explained that Chef has moved away to live with the Super Adventure Club, and when he eventually returns to South Park everyone is very happy, however, soon the boys realize that something is wrong with Chef: he is now a pedophile and starts making blatant sexual advances toward children. The boys seek out the headquarters of the Super Adventure Club to ask what they have done to Chef, and discover that the club is in fact a group of pedophiles who brainwashed Chef, despite sounding and looking like regular explorers (it is mentioned that there is a group of actual, normal explorers simply called the "Adventure Club").

Disgusted, the boys leave and go to a psychiatrist, tells them to take Chef to a strip club in an attempt to return his sexuality to normal. This starts working when he sees a fat black woman, but the Super Adventure Club shows up, knocks Chef out with tranquilizer darts and bring him back to their base to reprogram him again, taking the boys with them as well.

The leader of the S.A.C. goes on to say that their group has a higher purpose than simple pedophilia. He explains that they were founded by a man named William P. Phineas, who was an explorer but never had any success because everywhere he went to had already been discovered by someone else, so he decided to make it his goal to be the first person to have sex with children in those places. The club believes that children have magical things in their bodies called "Marlocs" that a person can absorb by having sex with them, making the pedophile immortal, apparently by the power of a monster called the "Ruler of Bethos", and that Phineas supposedly was the first to discover this, even though he died from being hit by a train in 1892 despite his immortality.

After he explains the origins and "true purpose" of the Super Adventure Club, the following exchange occurs:

Kyle: "Do you realize how retarded that sounds?"

The leader then tries to force the boys to leave (and nothing more, despite him being a pedophile), but they refuse, and he utterly fails to come off as threatening, eventually simply calling the security guards to take them to the door. However, Kyle attacks the guards with a baseball bat, and they then break into the room where Chef is being held to rescue him, with the club members pursuing them as they run from the hideout, which is located across a wooden bridge over a chasm. Before Chef can finish crossing the bridge, the leader of the club yells out to him that he will be happier if he stays with them, which works and Chef turns around to rejoin the pedophiles.

Just then, a bolt of lightning suddenly strikes the bridge, destroying it, burning Chef, who falls down into the canyon, bouncing on several rocks and landing on a wooden branch which impales him. Then, a mountain lion inexplicably appears and starts trying to eat him. A member of the S.A.C. tries to stop the lion by shooting at it, but the shots only hit Chef. Next, a giant grizzly bear appears and both it and the mountain lion tear Chef in half and bite off his face, leaving him dead (obviously). At Chef's funeral, Kyle blames the Super Adventure Club for making him into a pedophile and ultimately causing his death, saying he will be remembered as he was.

The final scene then cuts to the Super Adventure Club recovering Chef's body, and resurrecting him as "Darth Chef". 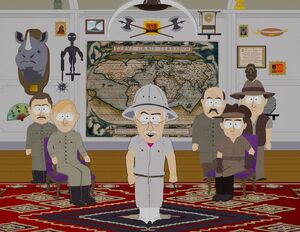 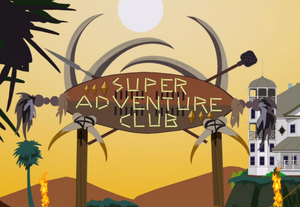 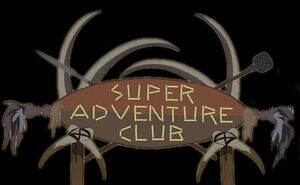 Retrieved from "https://villains.fandom.com/wiki/Super_Adventure_Club?oldid=4214305"
Community content is available under CC-BY-SA unless otherwise noted.