Superhero (in his own image)

Super Brainz is one of the secondary antagonists from Plants vs. Zombies franchise. He is a zombie superhero who was created by Dr. Zomboss to defeat the plants.

He made his first appearance as one of the playable characters on the Zombie side.

The top Zombie variant of him is known as Super Duper Brainz. When the Player entered a portal to his room, he introduced himself and gave them the first mission, Sidekick Tryouts, in which the Player had to defend a tombstone on Boney Island.

After completing the first quest, he tasked the Player to find his friends.

When his friends were reunited with him, the Player had to help his team defeat his rival, Super Bean.

Finally, after having defeated the Super Bean, he congratulated the Player and let them open another portal to another one of the top zombies, or meet Dr. Zomboss at his lab.

In Plants vs. Zombies: Battle for Neighborville, he is a playable character of the Attack class.

In this game, he is one of the playable characters on the Zombies, he commands Brainy and Sneaky Classes.

It was relvealed during the intro comic strip that Dr. Zomboss successfully transformed a Basic Zombie into Super Brainz with his Hero-Tron 5000. After the machine's malfunction which led to the creation of the rest of the plant and zombie heroes, he proceeded to battle against Green Shadow.

In Zombopolis Apocalypse, Super Brainz tried to make himself famous by giving out newspapers of how brains are good and how plants are bad. He also replaced the mayor's statue with a statue of himself, infuriating Green Shadow, Solar Flare, Spudow, and Grass Knuckles. He managed to defeat the Plants Heroes easily, but when he got distracted by a mirror, the plants managed to defeat him. While the plants were putting the mayor's statue back up, he disguised himself as a reporter to flee the scene.

In (Mission) RED Alert, Super Brainz appeared as the main facing opponent. As seen in the comics, he helped Dr. Zomboss capture Rose, who managed to send a message to Crazy Dave. He came up with a plan to rescue her by using Pepper M.D., Red Stinger, and Briar Rose. After seeing them, Zomboss ordered Super Brainz and the zombies to attack them, but easily got defeated by her team.

After the Players unlocked Zombie Missions, Dr. Zomboss disappointed at him while being distracted by a mirror.

In Battle at the BBQ, when Zomboss told him to turn on the lights, he turned on the Plant signal instead, which causes Green Shadow to attack. Super Brainz, The Smash and Impfinity tried to fight back against her, which she managed to do until she got tossed into Brain Freeze's jello, which managed to defeat her.

In The Great Cave Raid, he, alongside Rustbolt and Electric Boogaloo, found a hidden cave under Suburbia. Zomboss planned to make it into a new secret hideout, until Spudow came out of the ground nearby and attacked by lobbing his head at them multiple times. However, Super Brainz defeated him by tightening his head to prevent his attack.

In It Came From the Green House, Super Brainz, Impfinity and Brain Freeze came to the greenhouse when the zombies woke Chompzilla up. Impfinity forced her mouth to open, and allowed Brain Freeze to blast her mouth full of snow and prevented her from attacking them.

In KO at the OK Arcade, Super Brainz and Impfinity infiltrated the arcade and challenged Solar Flare to an arcade game, which the zombies won three out of four matches.

In Everything's Coming Up Goats Rose attempted to goatify Super Brainz, who was being distracted by a mirror, however he manged to use it to reflect the beam which made her get transformed into a goat instead.

In Menace on the Molten Mountain, the Peashooters attacked Super Brainz, Immorticia, Impfinity, and Neptuna on a mountain. The Zombie Heroes fought against Captain Combustible until Super Brainz used Neptuna's tank to extinguish his fire.

Cozmic Brainz is one of Super Brainz's Super Rare variants in Plants vs. Zombies: Garden Warfare 2. He is a cosmic being of the League of Awesome. He wields his primary weapon Cozmic Fists, which he can create a mini black hole that sucks plants in it and lefts them unrevivable when charged at level 3, and his other weapon, Cozmic Beam, an overheating beam of cosmic projectiles.

Electro Brainz is a Rare Super Brainz variant in Plants vs. Zombies: Garden Warfare 2. He is an electrical member of the League of Awesome, who controls his Electro Fists and Electro Beam that behaves like Super Brainz's, except that they can perform electric damage to enemies.

Toxic Brainz is one of Super Brainz's Legendary variants in Plants vs. Zombies: Garden Warfare 2. He is a chemical-bathed member of League of Awesome. His primary and secondary weapons are Toxic Fists and Toxic Beam, which deal with toxic damages to enemies in a way like the original Super Brainz. Additionally, he has a bar for his Toxic Overlord mode, which grants him speed and damage boost in a certain amount of time. To fill up this bar, he must does damages with his Toxic Fists.

Party Brainz is another Legendary Super Brainz variant in Plants vs. Zombies: Garden Warfare 2. He is one of the party characters. His primary and secondary weapons are Party Fists and Party Beam, which behaves like Super Brainz's weapons. Similar to all other party variants, earning vanquishes to fill his Party Time bar, which grants him temporary speed and damage boost.

Breakfast Brainz is another Super Rare and the final variant of Super Brainz. He appears in the Trouble of Zombopolis DLC. His primary weapon is Break-fists, which he rapidly punches enemies until he gets exhausted, and his second one is the Batter Spatter, which he shoots overheating rapid-fire ammo of waffles.

Super Brainz appears to be powerful, however, he lacks intelligence, and is HIGHLY egotistical. As seen in the comic, he can be easily be hypnotized by a mirror. Even if not being distracted by his own reflection, a dandruff repellent damaged, which made him run away to fix it. 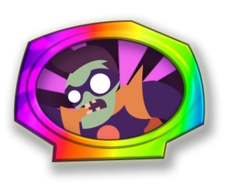 Super Brainz in the comics. 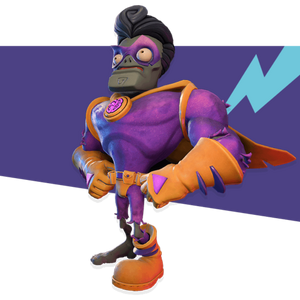 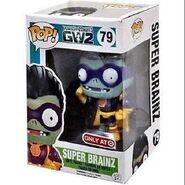 Super Brainz's Funko Pop!
Add a photo to this gallery

Retrieved from "https://villains.fandom.com/wiki/Super_Brainz?oldid=4069395"
Community content is available under CC-BY-SA unless otherwise noted.