To kill Jesse and Chester, and anyone else who interferes with her plans (failed).

To use the power of the Continuum Transfunctioner to doom the entire universe (failed).

The Super Hot Giant Alien is the main antagonist of Dude, Where's My Car?. She is a 60-foot giant extraterrestrial monster who wishes to destroy the universe.

She was portrayed by former Playboy model Jodi Ann Peterson.

The Super Hot Giant Alien chases the seemingly Nordic buff male guardians of the enigmatic small machine known only as the "Continuum Transfunctioner" that harnesses and controls such tremendous cosmic energy within it.

She emerged for the first time as a group of five "hot girls" in tight black clothes who promise the two main characters the oral sex of Jesse and Chester to find the Continuum Transfunctioner, a strange device they try to use to destroy the universe.

Later, they go to the brutish human male Tommy and his fellow jocks, to find what they seek in exchange for "oral pleasure". Then, you will see the brides of Jesse and Chester looking for the duo. After she appears in Chester's dream, she asks him for the device, while giving her pleasure.

Later, they meet Chester, Jesse, the athletes, the nerds of space and the two Nordic men who are also behind the Transfunctioner in an arcade center. Chester accidentally activates the Continuum Transfunctioner that will destroy the universe. Jesse and Chester discover that the Nordic men are good aliens.

Angry, the hot chicks merge into their true form, who swallows Tommy alive and scares off Tommy's goons. Then, the two Nordic men try to expel her to Hoboken, New Jersey, but she threw them aside. The device lands in Jesse's hands. She chases Jesse and Chester outside, She lost them, but she found them, and is about to pick them up. She prepares to swallow the duo, but is destroyed by the "Photon Accelerator Annihilation Beam". She is finally destroyed, while Tommy falls on a table with her giant underpants.

The Hot Chicks from outer space. 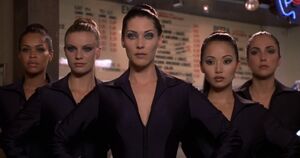 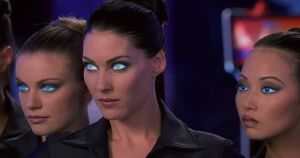 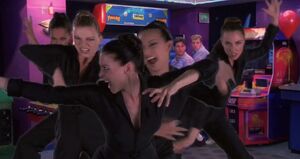 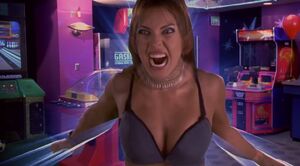 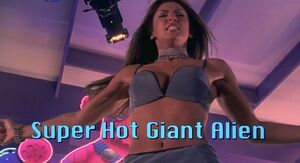