Super Rape is a one-shot villain from the Comedy Central animated series, Brickleberry, only appearing in the episode "My Favorite Bear". He is a hillbilly rapist who drugs women's drinks and then rapes their unconscious bodies.

In "My Favorite Bear", Super Rape was at Epstein's Bar with a bunch of other drunken barflies, celebrating the legend that was Flamey the Bear. He sang a musical number and danced in celebration of the famous bear who lives getting drunk and having sex. After a long time of partying the day away, at long last, Steve finally busted in and broke it up. Flamey the Bear introduced Steve to his new drunk-ass hillbilly friends, Shitkicker, Eddie One-Tooth, and the fabled Super Rape. Super Rape gave himself a further introduction, telling Steve in a creepy and dark voice to not be fooled by his name, making it clear that despite his nickname, he was no actual rapist. However, he continued to say that he was just a regular rapist, making the "Super" part of his name a lie, as opposed to the "Rape" part of his name. As he did this, Super Rape spiked a martini with a roofie and then grabbed a nearby woman by the back of the neck and then forcefully dumped the drink down her throat, making her drink it and drop unconscious. Super Rape continued to hold this sleeping woman beside him and partied with her at the bar. Later, Flamey the Bear announced that he'd be serving everyone drinks and putting it on Steve's tab. Super Rape was among one of the many barflies to cheer over this great celebration. However, Flamey the Bear would later leave the bar with Steve, neither of them paying the tab. Later, Super Rape, along with an angry mob of other people would come back for revenge. Super Rape angrily yelled at Steve for sticking him with the bar tab and then later ran up to him to beat him senseless with a golf club. 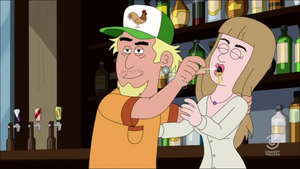