Allow women to rule the world.

Subjugate or kill all men.

Dr. Deidre Wentworth, better known as Superia, is a Marvel supervillain, making her debut as an enemy of Captain America. She is a misandrist who desires female domination of the world, with men either eliminated or enslaved to her whim.

Little is known of Superia's past. At some point, during her scientific research, she sent a time probe into the 23rd century. When the probe returned, it brought with it a book detailing a future nation called Femizonia, a matriarchal society where men were subordinate to women. Westworth's research led to her realizing that she was the ancestor of Thundra, ruler of the Femizons, and she thus made it her goal to bring this future into fruition.

One of Superia's earliest schemes was to assemble an army of female supervillains called the Femizons to travel to an island called Femizonia, where they planned to sterilize the other woman in the world, making their own reproductive capabilities a valuable bargaining chip. This plan was foiled by Captain America and his allies. She later returned with a smaller group of Femizons who fought against A.I.M. and attempted to assassinate the organization's CEO, Alessandro Brannex, to take over the organization. This attempt also failed, and Superia was nearly killed by former Femizon M.O.D.A.M., but was saved by Captain America.

Superia later returned, using her true identity of Dr. Deidre Wentworth, and granted a young woman named Cathy Webster superhuman capabilities through a combination of physical training and mental conditioning, turning her into the superheroine Free Spirit. However, Cathy turned on Superia when she learned she was being influenced to hate men, causing Superia to flee to Castle Zemo in Mexico with Baroness Zemo. Following failed negotiations with Baroness Zemo, Superia convinced Diamondback to join her as penance for having killed her former lieutenant Snapdragon. She later attempted to steal the Cosmic Cube, and was convinced to give Captain America a cure to reverse a paralytic effect resulting from the Super-Soldier Serum. She was then shot and seemingly killed by the Red Skull.

Through the use of the Cosmic Cube, Superia sent her knowledge back in time to her younger self. With this knowledge, the alternate Superia was able to infiltrate A.I.M. and create a new heroic identity for herself. She then infiltrated the Avengers by erasing Captain America from history following his 'death' in World War II. With her new position, Superia disbanded the Avengers and replaced them with the AmeriCommand, taking over America and turning it into a police state. Under Superia's rule, the X-Men, mutants, and 'illegal' superhumans such as Luke Cage and Spider-Man were captured and arrested. She also arranged for the Fantastic Four to be lost in the Negative Zone, forcing Henry Pym, the Invisible Woman and the Wasp into retirement, and seemingly killed Tony Stark whilst he was undergoing heart surgery, in truth removing his brain and conciousness to use his intellect and gloating to him well after she no longer had any need of him. Tath Ki, the Contemplator, learning of her actions, recruited a resistance movement of time displaced heirs to Captain America's legacy, including Steve Rogers, the USAgent, American Dream, and Commander A. Eventually, the group was able to undo Superia's actions.

Superia later appeared as the leader of H.A.M.M.E.R. following Norman Osborn's removal from power. She came into conflict with the New Avengers and was defeated, but she was later freed by Norman and joined his new roster of Dark Avengers as his Ms. Marvel. She and the other Dark Avengers were later defeated as fellow recruit Skaar revealed himself as a double agent for the Avengers. 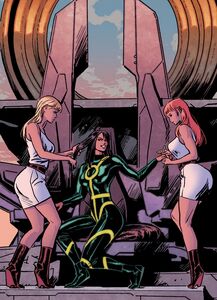 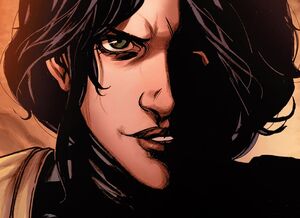