NOTE: This article is only about Tony Stark's villainous role as the Superior Iron Man in Marvel Comics, not his original heroic self.

Entrepreneur
Member of the Illuminati

Convince and manipulate people and make them even better and to promote the EXTREMIS 3.0 and spread its influence (succeeded for a while).

Superior Iron Man is a major antagonist from Marvel Comics. He is a villainous version of the heroic character who would debut following the events of Axis to become the titular villainous protagonist of the comic book miniseries of the same name. Unlike the original Iron Man, this version has probably the darkest possible qualities of Tony Stark merged into a single being, with this Stark being designed to be a fully-fledged "bad guy" rather than morally dubious.

Superior Iron Man would be opposed by several heroes, the most notable being Pepper Potts, Daredevil, and (for a short while) the original Tony Stark's memory, which had lived on as an artificial intelligence.

The origins of Superior Iron Man would begin in the Axis event, in which the morality of Earth's heroes and villains was reversed by magic. While the spell was undone the now corrupt Tony managed to shield himself and thus retained his evil personality even as most of Earth's heroes reverted back to their usual selves.

This would allow a new, darker Tony to infiltrate society and build an empire for himself, growing into an egotistical monster he would ultimately show himself as a true villain by releasing the Extremis 3.0 virus to the public (Disguised as an app), addicting people to the substance and then depriving them of any further "upgrades" until they paid his fee of 100 dollars per day.

This caused social unrest and panic, as well as great suffering as a large section of society became in effect drug addicts enslaved to Tony's will, all the while Tony played things off as a game and spent much of his time indulging himself in parties and social events while the world around him suffered.

Tony wasn't stupid, however, he knew that he had to balance his cruelty in order to prevent the world rising up against him and thus he engaged in hostile take-over of many companies, forced people to promote his Extremis Apps positively (via blackmail) and even went as far as unleashing an army of advanced drones to act as a personal police force - in essence becoming a tyrant.

This version of Iron Man was killed during the incursion crisis in Issue #44 of the Avengers (2013), when the original Marvel Universe and the Ultimate Universe collided together, wiping out all life in both. He spent his last moments fighting Captain America, only for both to be killed by a crashing helicarrier shortly before the entire universe was erased. (Reed Richards would later restart the entire multiverse, restoring the destroyed universes into existence again, but Iron Man was back to normal in the new version of the universe and not corrupted.)

While identical to Tony Stark this version is noted for his suit, which is white with glowing blue - without the suit he is basically the same man Tony Stark was, physically, the only difference laying in their personality.

As Superior Iron Man, this version of Tony displayed an array of vicious personality disorders such as malignant narcissism, a deep love of power and wealth, a complete lack of care for the suffering of others and a willingness to engage in unspeakable acts of treachery and deception in order to claim criminal gains.

Some of the most striking examples of his new, twisted personality are when he gets a large portion of the population addicted to the Extremis 3.0 virus for profit, betrays Pepper Potts and gives Daredevil his eyesight back (but only on a temporary basis), when an enraged Daredevil called Stark out for playing God he simply claimed he was not playing God, rather he "had been playing human", showing he has a God Complex.

He can be seen, more or less, as the Hyde of Stark, his darkest inner personality that he has kept repressed for years, unleashed by the Axis spell and unwilling to die off like the others. This makes him one of Marvel's most dangerous villains, with the full intelligence of Stark but none of his morality to keep him in place. 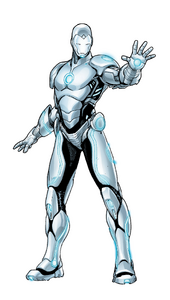 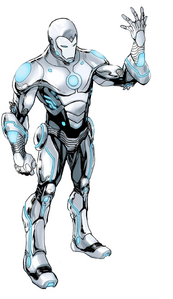 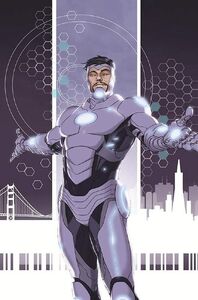 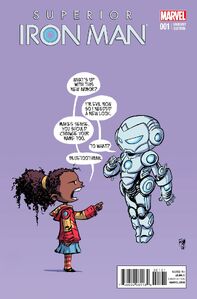 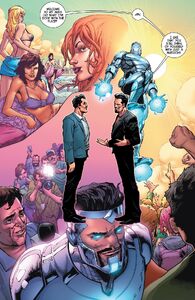 Superior Iron Man confronting his digital self inside his mind. 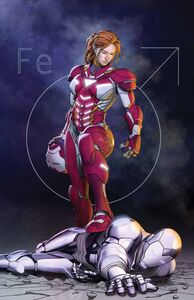 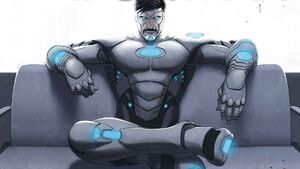 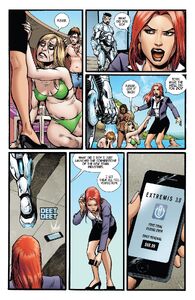 Tony watching as his app takes a turn as Pepper discovers his true colors. 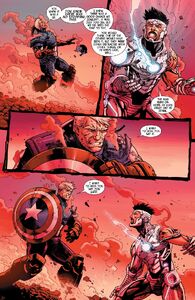 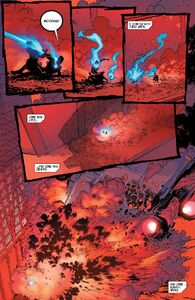