Super strength
X-Ray vision
Throwing an S off his chest

Having sex With women

Clark Kent, better known as Superman, is an antagonist in Family Guy, wherein he's been portrayed as a misogynistic, perverted scumbag, who uses his x-ray vision to look at women naked, inadvertently giving them cancer.

He was previous voiced by Patrick Warburton in "Holy Crap" and Seth McFarlane in "Stewie Griffin: the Untold Story" and "Blind Ambition".

He is currently voiced by John Veiner is all of his speaking appearances after that.

In "A Hero Sits Next Door", Superman plays strip poker with the other superheroes and they make Wonder Woman take her top off so they can look her breasts, even though she was clearly uncomfortable with it.

In "Holy Crap", Peter died and went to Hell, where he saw Adolf Hitler, Al Capone, John Wilkes Booth, and Superman. When asked why he was down there, Superman said that he was with a hooker who made a joke about him finishing faster than a speeding bullet and out of anger, he "ripped her in half like a phonebook".

In "Padre de Familia", Superman, in the form of Clark Kent, gets ready for his date with Lois Lane. When Lois Lane comes out, he uses his x-ray vision to look at her naked but ends up looking inside of her body, where he sees a developing fetus in her belly. Not wanting to deal with this, Clark Kent dumped Lois Lane abruptly and fled.

In "The Most Interesting Man in the World", Superman had apparently been using his x-ray vision on women to see them naked so much that he gave them breast cancer. Three women were sitting around the work place, when Clark Kent came in and asked what the problem was. He pretended not to know what could have caused it but also made it clear to the audience that this had been happening to every woman he's ever known.

In "Peter's Sister", it was shown that Superman has a history of having sex with women to death by using his superpowers when thrusting into them. Superman stood with some cops as they observed the corpse of a naked woman with her head blown off in bed and Superman withheld evidence by not telling them what happened, even though he knew for a fact that he was wholly responsible. Another cop brought up that this mysterious case had also happened to three men in a public bathroom, revealing that Superman is bisexual. Still not wanting to admit to anything, Superman simply deemed this case as "unsolvable". 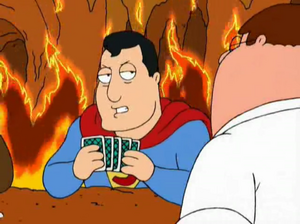 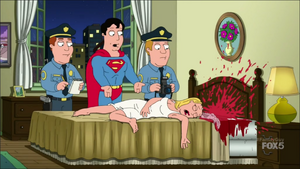 Superman at his own crime scene.