Killing and threatening the Citizens of Metropolis

Rule Metropolis in his own way.

The Superman Clone is the main antagonist in the second half DC Animation's first ever direct-to-DVD movie Superman: Doomsday. As the name implies, he is the evil clone of Superman created by Lex Luthor to attend his dirty work. Eventually, he breaks free of Luthor's control and becomes the vigilante wannabe protector of Metropolis.

He was voiced by Adam Baldwin.

Following the apparent death of Superman defending the world from a rampaging Doomsday a clone was created in his image: however the clone soon became totally out of control and started to dominate the city as a merciless tyrant, forcing the real Superman to emerge from hiding (having been severely injured - but not killed). The two men of steel battled for control over the city, with the original Superman ultimately coming out on top.

The Superman Clone was responsible for the death of Toyman (at least in this movie's canon) - via dropping him onto a police car from a great height, this act of murder was the first sign of the Clone going insane and was also the moment that separated him from the real Superman (who never deliberately kills his enemies).

The Superman clone is actually an original character modeled after most of the Supermen from the Return of Superman comic storyline excluding Steel. The clone is a clone like Superboy, a general villain like Cyborg Superman who also pretended that he is the real Superman, and uses the same methods as the Eradicator.

The Clone was created by Lex Luthor after the apparent death of the Real Superman defending the world from a rampaging Doomsday. The Cloning Project was supposed to create an army of Supermen and to follow the laws of Lex Luthor. The Clone appeared in time to save Lois Lane and a child who was taken hostage by Toyman. Toyman was then apprehended by the police, soon after this the clone went to LexCorp to find Luthor only to be a trap so he can be beaten by Luthor and congratulated the clone while unconscious by fooling the citizens of Metropolis that he is the real Superman returned from the grave.

While flying across Metropolis he heard on the news feed that Toyman killed a four year old girl before being arrested. This angered the Clone and then went to Metropolis Police Precinct. The Clone arrives and drops Toyman on a police vehicle from a great height, this action showed that the clone was going insane and was a mirror version of the real Superman. The Clone saved a cat from a tree and then starts to make threats to the old lady (implying he might kill the cat if it gets stuck on the tree again). The police arrived to arrest Clone Superman who then attack them a told one of the officers to "watch the Language". The next day he returned to Luthor who was not happy about the death of Toyman. Luthor ordered the clone to find the body of the real Superman. While walking in the streets of Metropolis, he went to a local haircut parlor to find out that he has a ball up lead to his brain (a kill switch for Luthor if the clone gets out of hand). The clone removes the Lead by using his heat vision and a pair of scissors. He then tries to kill Luthor by throwing the same trap place that he was beaten up and throws it in the streets of Metropolis. He then attacks the military with his heat vision only because he cares.

The Battle of the Supermen and Death

The Real Superman returns only 60 percent strength and with a Kryptonite gun. The two Supermen fight and the battle ground become of what it looked like when Superman supposedly died. They continued to fight near the Superman Memorial. The Clone used Heat Vision on Lois after she tried to shoot the clone with the Kryptonite gun, but only destroy the weapon itself not Lois. The men fought covered in tar and before the clone could kill Superman, the real Superman used his heat vision on the Kryptonite ammo that was glued onto the clone with the tar. In the Clone's dying breath he told Superman to protect the people and Superman replied "It's why I'm here". The Clone died shortly after ending his insane rampage. 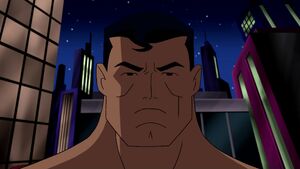 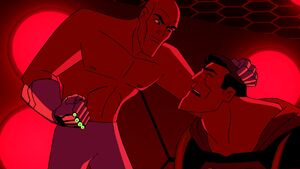 The Clone beaten by Lex Luthor 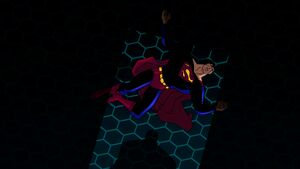 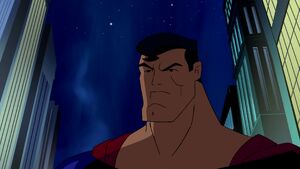 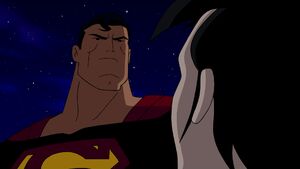 About to kill Toyman 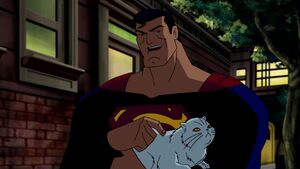 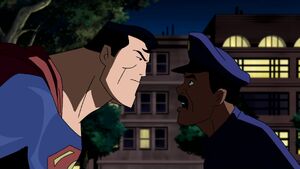 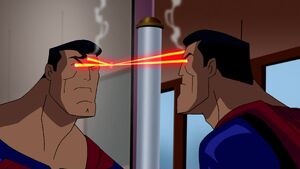 Removing the lead from his brain by using his heat vision 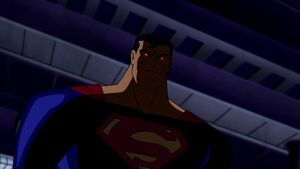 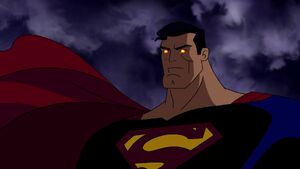 About to use his heat vision on the military 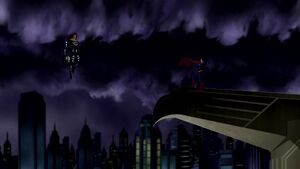 The Clone meeting the Real Superman 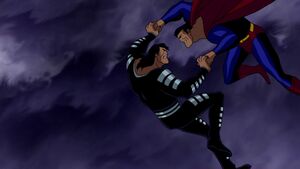 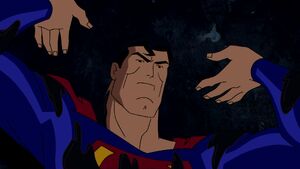 About to kill Superman 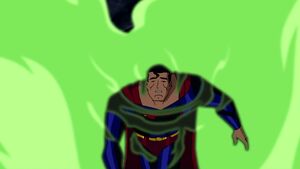 Dying from the Kryptonite 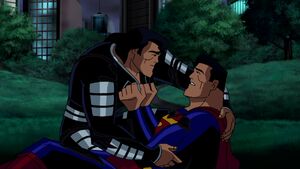 In his dying breath, the Clone tells Superman to protect the people 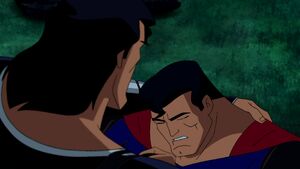 The Superman's Clone vs. Lex Luthor!