My wife (by Alan Rails)

Titty-bean (by One Million Ants)

Member of the Vindicators

Being with Million Ants (formerly).

Use Doom-Nomitron's death to make it look like the Vindicators saved Earth in order to be seen as heroes. (succeeded)

Kill Rick and Morty after all of her teammates die. (failed)

Supernova is the main antagonist of the Rick & Morty episode "Vindicators 3: The Return of Worldender" and the spin-off prequel miniseries, Vindicators 2: Last Stand Between Earth and Doom. She appears as a member of the Vindicators who is presumably a famous heroine and a high-ranking member in her flawless team. However, over the course of the episode, she slowly loses sanity to the point of attempting to murder Rick and Morty.

She was voiced by Gillian Jacobs.

Supernova was the leader of the Vindicators superhero team and the wife of Alan Rails. However, she had an affair with another teammate called Million Ants and got pregnant, although she claimed the child was Alan's to avoid suspicion. She and her team also recruited Rick Sanchez and his grandson Morty for an unknown adventure, but would try to avoid them after that, as none of them liked Rick.

Due to the nature of both her body and Million Ants', Supernova ended up miscarrying right after she and another teammate Vance Maximus had destroyed an enemy alien species on the planet Dorian-5. Supernova prompted Vance to go back to their spaceship and, right after that, her body absorbed the energy it had given to the unborn child, which caused an explosion that obliterated the whole planet she was in.

This experience left Supernova depressed, to the point of murdering fellow team members Lady Katana, Calypso and Diablo Verde in a drunken rage. Later, when their enemy Doom-Nomitron got killed by one of Rick's traps (without Rick knowing), Supernova took the chance to take full credit while also cover up the deaths of her former teammates, which strained her relationship with her remorseful husband even more.

Vindicators 3: The Return of Worldender

The vindicators called Rick and Morty for assistance due to them needing Rick's assistance. During the briefing Rick constantly made jokes and remarks to other members of the team much to Supernova's annoyance. She next appeared whilst going on a mission with the team to destroy their arch nemesis Worldender however a drunken Rick already defeated him the previous night and invented an over complex Saw like trap game. Two members of the team die leaving her, Alan, Rick, Morty and Million Ants.

After an argument during which Supernova admits that she and Million Ants had a child and kills Alan. She restrains Rick and Morty. After the final challenge she finally snaps and attempts to murder Rick and Morty, Million Ants attempts to calm her and ends up moving her however she ends up brutally murdering him and once again attempts to kill them before an elevator leads them up to a party where a pop artist is playing. Supernova pretends to dance to the music and slips away, Morty points this out to Rick however he doesn't care and lets her go free, commenting that twenty people try to kill him every week and that he ends up befriending them. She is likely to return in a later episode. 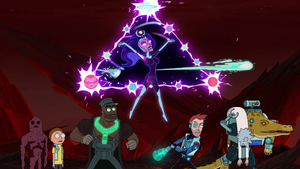