Make a time loop until the show is perfect.

She is voiced by Mariee Devereux.

As seen on Sunset's Backstage Pass, Kiwi and Supernova were struggling as they strolled until she saw a glow and that glow was a magic Time Twirler from Equestria, the Time Twirler made time repeat so she put the Time Twirler in her bow and began to redo the day for the show to be perfect.

Soon after Sunset and Pinkie arrived where they were and they started to fight, when the 4 girls went up on stage Sunset destroyed the magic object so Kiwi threw herself on the ground and started to cry so they started to make a great show.

She has purple striped hair all tied up like a bow. Her shirt is blue and purple with a big heart in the center and her skirt is red with two hearts on the top. She wears black knee socks and has pink pump shoes, Her eyes are blue and her skin is yellow. She has two hearts on her cheeks.

She always wants perfection, she hates it when people are dumb or silly! However, she does get easily bored and keeps going on with other's plans. When her plan goes wrong she can overcome everything in a friendly way.

In the beginning, her only skills were singing, dancing, playing the drums and possibly playing another instrument! But after she found the magical object she and began to reset the world in a time loop. 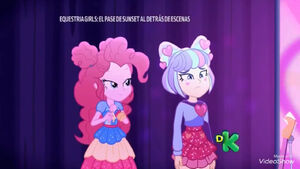 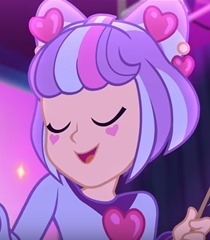 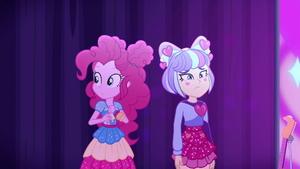