Ruler of the Martians (formerly)

Searching human mothers and abducting them.

Abduct human mothers to have them take care of their children (succeeded only to backfire).

The Supervisor is the main antagonist of Disney's 2011 motion-capture animated film Mars Needs Moms, which is based on the 2007 book of the same name by Berkeley Breathed. She is the tyrannical ruler of Mars who abducts Milo's mother because of her knowledge on how to raise children.

She was voiced by Mindy Sterling.

That night when Milo was sent to bed as punishment for feeding broccoli to the cat, his mother gets abducted by the aliens and he follows along. He boards a Martian spaceship and is taken to Mars. During his quest to save his mother, he meets Ki and Gribble, aka George Ribble, a childish adult who too was taken hostage long ago. Gribble explains that Martian female babies are currently raised by nanny-bots with the memories extract from other mothers, while the male babies are sent down to the dump to be raised by adult male Martians, which are the furry creatures that Milo encountered earlier. So the gang decides to change how Mars works, fight the evil, repressive system and stop all the mothers from being destroyed.

Milo manages to save his mother and they try to escape across the Martian surface, but the Supervisor shoots Milo's foot, causing him to trip and shatters his oxygen helmet. His mother gives him her own helmet, sacrificing herself to save Milo. The Martians are awed, as this is the first time they have experienced love. Gribble finds his mother's old helmet buried under some dirt, and gives it to Milo's mother, saving her life. Ki brings a ship for them to escape in, but the Supervisor steps in and surrounds them.

Ki reveals that the Supervisor lied to them by showing them an ancient mural of a Martian family that she discovered earlier, showing that Martians were meant to be raised in families, with love, but the Supervisor insists that the current system is better, because it is more efficient. The guards decide to turn their backs on the Supervisor and have her arrested for her evil-doings. The Martians celebrate and they start a new life taking care of the children as a family.

In the post-credits scene, the Supervisor is seen changing a Martian baby's diaper, only for the diaper to fall off and the baby to urinate on her face, much to her irritation. 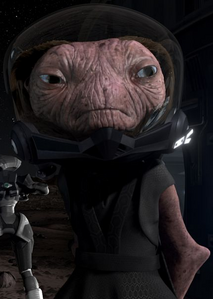 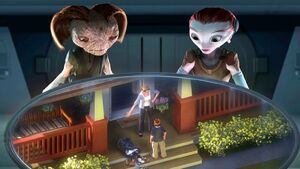 Retrieved from "https://villains.fandom.com/wiki/Supervisor_(Mars_Needs_Moms)?oldid=3944894"
Community content is available under CC-BY-SA unless otherwise noted.