Destroy all life that is not a Dalek.

Defeat the Imperial Daleks
Wipe out all life in the universe using the Reality Bomb.

The Supreme Dalek is a variant of the Daleks stated as being the highest-ranking member of Dalek society - surpassing even Davros himself in terms of power - and a major antagonist in the British sci-fi series Doctor Who.

The "Supreme One" resembles a modern Dalek but has noticeable differences. One such is that he had a red coloration, gold hemispheres, collar and neck rings, three plinth-mounted dome lights featuring cages with three, rather than four uprights, and large golden clamps connecting its shoulders to an extended neck bin.

Planet of the Daleks

When Thals stole his ship, the Supreme Dalek, and his escort discover this, and the Doctor. Seeing this as a chance for revenge, he ordered them to pursue. Despite his attempt to kill the Doctor, and Jo, they escaped. The Dalek Supreme ordered one of his escort to have Dalek command send a rescue craft, and have a team of experts free the army from the ice, vowing that despite their delay, the were never defeated.

Resurrection of the Daleks

After the end of the Movellan-Dalek war ended in a loss for the Daleks, with their numbers decimated by their virus, the Dalek Supreme elected to rescue Davros from his imprisonment to find a cure. This was part of several schemes to restore Dalek supremacy, as he also planned to create a duplicate of the Doctor and companions to assassinate the Time Lords, and a back up plan to destabilise Earth of 1984 by having their leaders replaced by duplicates. He was forced to bolster Dalek forces with humanoid Dalek troopers and mercenaries, and worked closely with their commander, Lytton. However, neither trusted the other, with the Supreme considering Lytton too arrogant. The Daleks managed to free Davros from the space station which served as his prison, despite disagreements with Lytton over strategy. However, Davros elected to remain aboard the space station, and the Supreme played along with Davros's demands for a time.

The plan to duplicate and Doctor and his companions initially succeeded, but was thwarted when the Doctor managed to turn Stein, a Dalek duplicate who had captured him, against the Daleks. Davros also proved to be treacherous when he secretly converted a pair of Daleks and several troopers, instigating a civil war against the Supreme Dalek. The Supreme ordered Lytton to execute him directly, as he was paranoid about Davros escaping. When the troopers failed, he instead dispatched Daleks to carry out the task but these were killed by Davros, who released the Movellan virus. The Supreme ordered Lytton to exterminate Davros's forces, then dispatched a squad to execute Lytton when he had outlived his usefulness. In the end, the Supreme's forces were killed with the Doctor released the virus. Despite his defeat, the Supreme Dalek was confident that his Earth duplicates would collapse it's society, and taunted the Doctor. He was cut off when Stien activated the space station's self-destruct, which also destroyed the Dalek Battlecruiser, seemingly killing the Supreme Dalek. However it was possible that he escaped at the last second.

While Davros's Imperial Daleks fought the Supreme Dalek, according to the audio drama The Curse of Davros, Davros still required a Dalek to serve as his second in command. This Imperial Supreme Dalek was kept on a tight leash.

Remembrance of the Daleks

During the Dalek Civil War, as seen in Remembrance of the Daleks, a Supreme Dalek led the Renegade Daleks, who fought against Davros' Imperial Daleks. In November 1963, it formed an alliance with the Association led by George Ratcliffe to obtain the Hand of Omega. It formed a mental link with a girl who acted as the Battle Computer. The Renegades managed to capture the Hand, with the Supreme leading the Daleks after the Seventh Doctor after he  disabled their Time Controller. After the Imperial Shuttle arrived in Earth's atmosphere, the Supreme ordered his forces back to their hideout.  The Dalek Supreme ended up as the last surviving Renegade Dalek after battling with the Imperial Daleks, where the Hand of Omega was taken by the triumphant Imperials. After Skaro was destroyed by the Hand of Omega, The Doctor convinced it that it's people were dead, and that it had no purpose. At this point, in a state of confusion and distress, it destroyed itself, breaking the link with the girl.

Another Supreme Dalek acts as the leader of the New Dalek Paradigm in the Eleventh Doctor's Era. This Dalek was also a high-ranking member The Alliance of the Pandorica, possibly even it's leader, appearing as the main antagonist of Series 5.

In the episodes The Magician's Apprentice and The Witch's Familiar another Supreme Dalek (similar to the one in Journey's End) served as leader to the Daleks that captured Clara Oswald and Missy. He also ordered their supposed extermination. He along with the other Daleks are attacked and destroyed by the Daleks that lived in Skaro's sewers before the city's collapse. 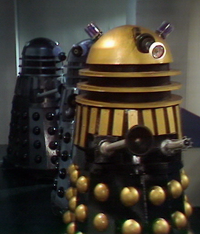 A Supreme Dalek from the Classic Series 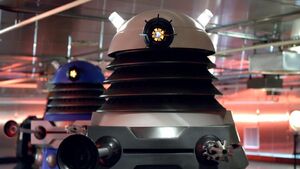 White variant, leader of the New Dalek Paradigm as seen in "Victory of the Daleks" 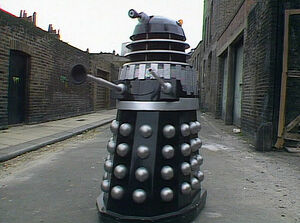 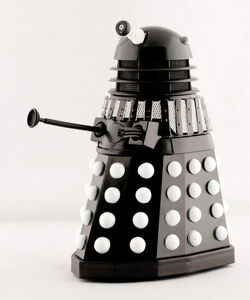 Black variant seen in "Resurrection of the Daleks" 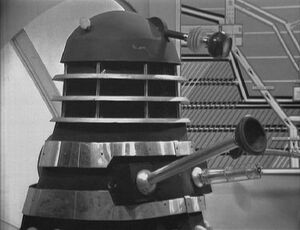 A supreme Dalek in "Dalek Invasion on Earth"